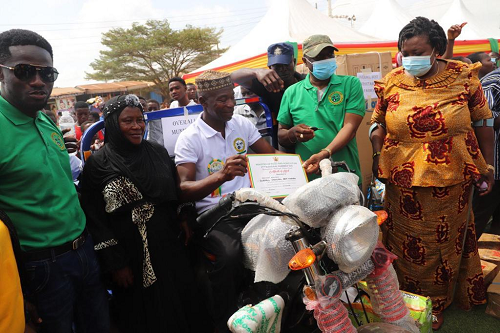 Mr Akwannuasah Gyimah(2nd right), MCE for Asokwa, handing over the keys to the tricycle to Mr Ibrahim Asamoah, the Municipal’s Best Farmer. Those with them include Ms Martha Ashami Armah(right), Municipal Director of Agriculture. Follow @Graphicgh

In the Ashanti Region, Emmanuel Baah, reports from Dompoase in the Asokwa municipality that a 54-year-old native of Tatale in the Northern Region, Mr Ibrahim Asamoah, emerged as the municipality’s best farmer.

For his prize, he took home a tricycle, better known as aboboyaa, a certificate, Wellington boots, a standing fan and other farm inputs.

He has become the third person to win the overall best farmer award since its inception in the municipality.

Mr Asamoah is engaged in animal husbandry, rearing animals such as cattle pigs, goats, and sheep and is also involved in poultry farming.

He also does crop farming and has a cocoa plantation.

Speaking at the event, the Municipal Chief Executive of Asokwa, Mr Akwannuasah Gyimah, praised farmers for their hard work which had sustained the nation all these years.

He said even though the municipality was a very urban one, a lot of the residents were engaged in farming and that the area was a  leading producer of vegetables in the region.

“About two-thirds of all vegetables sold in markets in Kumasi and its surrounding districts come from Asokwa”, he emphasized.

He told the vegetable farmers that the Minister of Food and Agriculture, Dr Owusu Afriyie Akoto, had honored a promise he made last year, and has procured a cooling van for the swift conveyance of vegetables to Accra for local consumption and export to the international markets.

On her part, Ms Martha Ashami Armah, the Municipal Director of Agriculture, advised farmers to keep proper records to help them see the progress or order wise of their farming activities.

She also urged them to use improved planting materials such as seed, and practice Good Agricultural Practice(GAP) to enable them benefit fully from agriculture.

He was presented a tricycle, three sprayers, six cutlasses, bars of key soap, pieces of cloth and three wellington boots among others.

Mr Yeboah, who hails from Abesim was a worker at a sawmill company but resigned
ventured into farming and rearing of livestock.

Married with two children, he cultivates different varieties of crops and in addition to the rearing of livestock.

In all, 16 farmers were awarded by the end of the ceremony during Farmers in the area exhibited their

The Sunyani Municipal Chief Executive (MCE), Mr Ansu Kumi, charged the department of agriculture in the area to explore innovative ways of developing the skills of the farmer-based organisations.

The Sunyani Municipal Director of Agriculture, Mr John Ofosu Dankyere, said the government had provided farming tools and equipment to facilitate farming in the municipality.

He called on the youth to take advantage of the government’s interventions such as as Planting for Food and Jobs and the free provision of cashew, mango and coconut seedlings to make a living for themselves through farming.

He explained that agriculture was a major source of income in the municipality, especially food crops and livestock.

Mr Larkai who has been farming for two years was presented with a tricycle, wheelbarrow, knapsack sprayer, wellington boots, spade/shovel, cutlass, agro-chemicals, disinfectants, feed, transport crates and a water tank for his efforts over the past year.

In an interview with the Daily Graphic after receiving a plaque and a symbolic cutlass, Mr Larkai urged the youth to "put their energies into agribusiness because it pays".

He added that for the next farming year, he was looking to expand his farm so he could make more profit and win a national best farmer award.

The first runner-up position in the municipality went to crop farmer Mr Ahmed Ibrahim, who also received farming implements and a plaque as his award. 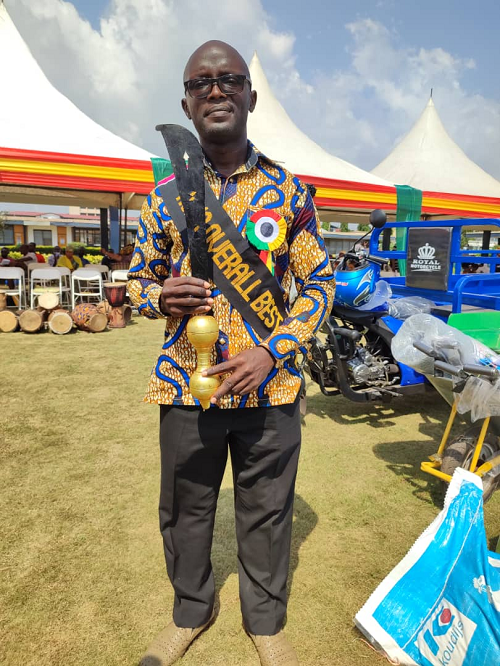 In the Kpone Katamanso Municipality in the Greater Accra Region, 11 farmers were awarded for their contribution to food security as part of the 37th Farmers' Day celebration, reports Benjamin Xornam Glover.

Mr Daniel Kofi Adjei, 46, was adjudged the Municipal Best Farmer and received a tricycle, cutlasses, field boot and cloth among other items.

Madam Rebecca Marmle Kudadjie from Okushibri was the first runner up and Mr Sulemana Wahab was the second runner up, who received various prizes.

The Municipal Chief Executive for Kpone-Katamanso Municipal Assembly, Mr Samuel Okoe Amanquah, who handed the awards to the winners at a ceremony held at Gbestile said the Government would continue to play its key roles to improve agricultural production.

He said the Assembly has also made tremendous achievements in the period under review. This includes the distribution of chemicals to 120 farmers, comprising 75 Males and 42 Females to combat fall armyworms that infested maize farms in the Municipality.

Again, 34 staff from the Department of Agriculture have benefited from a training on Technical Education in Modernizing Agriculture in Ghana (TEDMAG) on Farmer Based Organisation while over 200 Farmers, comprising 96 Males, 150 Females and 42 staff received series of training on good agricultural practices.

The Municipal Director of Agriculture, Mrs Ernestina Agyiri said in terms of crop production in the municipality, a total of 1825 farmers benefited from the fertilizer and seed subsidy programme of the government.

Additionally, 265 farmers and 10 institutions were registered to benefit from the free distribution of improved varieties of Coconut and Mango seedlings under the Planting for Export and Rural Development (PERD) programme.