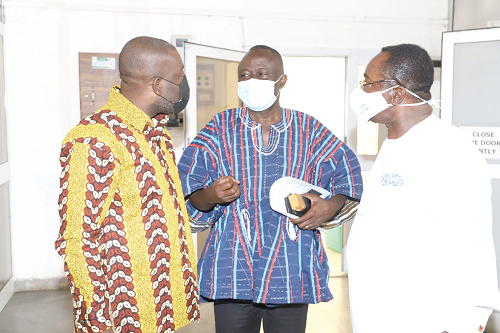 The country’s export earnings from the agricultural sector are projected to grow eightfold in the next 10 years, the Minister of Food and Agriculture, Dr Owusu Afriyie Akoto, has said.

According to him, the government’s implementation of sound policies such as the Planting for Food and Jobs (PFJ) had consolidated efforts to ensure food security and increased agricultural export earnings.

“If you look at the data, Ghana is the only country in the green zone when it comes to food security in West Africa. All the others are in an emergency, so Ghana is like an island making progress in a region where there is crisis,” he said.

He also said 278 companies, representing 48 per cent of all projects under the One District, One Factory (1D1F) policy, were agro-based, being fed by the boom in local production.

Dr Akoto further explained that the improvement in staple food production was as a result of dedicated efforts by farmers through the PFJ programme to improve yields.

“The PFJ started with 200,000 farmers, and the number grew to 1.7 million farmers. This year, we are targeting 1.5 million farmers, so you can see the interest of farmers in the programme,” he said.

According to the minister, fertiliser distribution to farmers had also increased in the last four years, with a target of one million farmers expected to benefit from the distribution exercise this year.

On rice production, Dr Akoto said Ghana was on course to attain self-sufficiency by 2023-2024, while soya production was also expected to reach one million tonnes this year.

“Farmers are taking advantage of natural valleys to improve rice production. We will provide them with improved seeds and get rice mills closer to them,” he added.

The minister further said the importation of maize had reduced, and that Ghana was now exporting the staple.

He said the government was also expanding storage, irrigation and mechanised farming facilities across the country, including the construction of 27 storage facilities with a capacity to store 80,000MT, in addition to 37,000MT of facilities that existed before 2017.

“A total of 8,980 units of various machinery and equipment were imported and distributed in 2019 and 2020. Total beneficiaries were 927, made up of 33 district assemblies and individuals, while 33 bulldozer operators were trained in Tamale and are operating in the Northern, North East, Savannah, Upper East, Upper West and Bono East regions,” he said.

Dr Akoto further said the government was making “serious attempts” to make Ghana self-sufficient in the production of vegetables through greenhouse technology to take advantage of the European market.

He said focus would also be on tree crop production to improve earnings, adding that some 23 million seedlings had been distributed to farmers.

“We now have cashew trees growing in the Upper West Region and this can improve people’s earnings significantly,” the minister said.