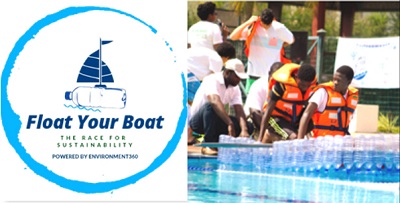 Environment360, a non-governmental organisation (NGO) concerned with recycling has launched its fifth annual Float Your Boat Competition to help support the creative re-use of recyclables by children

campaign which aims at supporting children in the practical use of science and mathematics has been dubbed “The Race for Sustainability” and slated for April 27, 2019.

Registration for the competition closes on April 15 and the winning team at the end of the contest will take home a cash prize of GHC 500.

According to a statement issued by Environment360, the competition also doubles as a fundraiser for the Ghana-based NGO that created creates inclusive recycling programmes that have an economic, environmental and a social impact on communities.

"Although the organization is best known for its community collection schemes for plastic, the organization also boasts an impressive school program that supports 43 schools in the Greater Accra area in waste segregation programs as well as environmental education programs. Since the competition’s inception in 2014, more than 20 schools have participated in floating plastic bottle boats," the statement said.

"Registration is now open for the event until the 15th of April, 2019. Private schools wishing to participate are asked to pay an entry of GHS 500. However, public schools can be sponsored by corporate bodies and/or individuals. Once teams are registered, they are then tasked with collecting plastic bottles from their environment and building a boat from the bottles collected. The winning team takes home a cash prize of GHS 500 while second and third place teams take home GHS 200 and GHS 100 respectively. There will also be special awards for the best-dressed team, the best boat design and the best team name".

According to Nana Gyedua Akwaboah, Communications and Marketing specialist of Environment360, it is the first year the competition has been open to public schools and Environment360 is hopeful that companies will use their corporate social responsibility resources to help support a public school team.

“Over the years many of our public schools have expressed a desire to be part of the competition, but often find the entry fee a challenge. As a result, this year we decided to reach out to individuals and corporations to help support the schools that cannot afford the registration fee. So far, we have had several people sign up to sponsor teams and we are expecting more,” Madam Akwaboah said.

She also advised organisations interested in partnering Environment360 on the project to contact the organization via email; This email address is being protected from spambots. You need JavaScript enabled to view it. or on 0244669851.