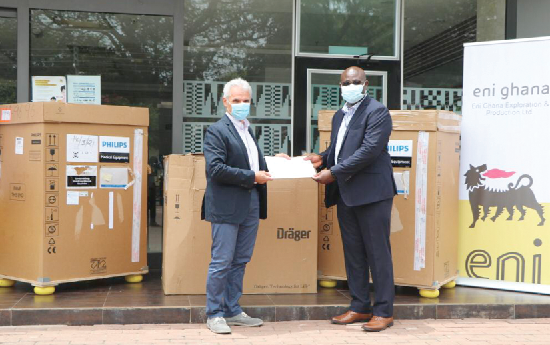 The Managing Director of Eni Ghana, Giuseppe Valenti, presenting the items on behalf of the partners to Dr Patrick Adjei, Head of Department, Internal Medicine and Therapeutics, Korle-Bu
30.5k Shares

The partners in the offshore Cape Three Points oil and gas operations have donated medical equipment to the Korle-Bu Teaching Hospital in support of the fight against  COVID-19.

The equipment donated included a 30-bed capacity medical tent, 20-vital sign monitors and four portable ultrasound machines with cardiac probes as well as four prefabricated washrooms for the use of patients housed in the tent.

This donation by Eni and its partners in the offshore Cape Three Points oil and gas operations is estimated at  $900,000.

Other members of the  Cape Three Points oil and gas partners are Vitol and GNPC.

According to the partners, the harrowing effect of COVID-19 on the country’s health infrastructure was what triggered the need to lend the support.

The partners had earlier made similar donations to some health establishments in its operational areas in the Western Region.

Last year, Eni Ghana and its partners, Vitol and GNPC, made similar donations of medical equipment and personal protective equipment to the Ghana Health Service, the St Martins De Porres Hospital in Eikwe and the Ellembelle District Health Directorate to help manage the COVID-19 in the country.

The Managing Director of Eni Ghana, Giuseppe Valenti, said “Eni Ghana and its partners make the health of its workers and the citizens of the host countries in which it operated a priority.”

The company, he said, had continuously invested in improvements in healthcare systems as proof of its commitment to its stakeholders.

Eni is an integrated global energy company operating in over 60 countries.

It has been present in Ghana since 2009 in the upstream oil and gas activity and currently produces a gross of about 70,000 barrels of oil per day.

The gas produced from the Sankofa field in the offshore Cape Three Point oil and gas operations ensures reliable, stable and sustainable fuel for Ghana’s power plants and posts a positive impact for the country.

Eni Ghana and partners develop local production, enhance access to energy, improve skills and create jobs as well as revenues and royalties, while reducing reliance on imported fuel which weighs negatively on the balance of payments.

Receiving the items on behalf of the Chief Executive Officer of the Korle-Bu Teaching Hospital, the Head of Department of Internal Medicine and Therapeutics, Dr. Patrick Adjei, commended the company for the support.

He said the equipment would greatly help in the fight against COVID-19.