Tears flowed at the Sunyani West Municipal Assembly Hall last Friday when a former football star, Seth Asu Kwabena, who is now an amputee, was called to collect his share of items meant for Persons with Disabilities (PWDs) in the area.

The former BA United and Gold Stars player, who was among the beneficiaries, burst into tears as soon as he was called to come forward for his spraying machine.

His emotional action triggered others at the assembly’s conference hall, including some workers of the assembly at the ceremony, to shed tears.

The ex-football star, who had his right leg amputated, told the Daily Graphic that he could not control his tears after he pictured his previous status.

He explained that he had his leg amputated because of foot damage from long-term complications of diabetes, saying, “if I recall what I could do in my heydays and the kind of suffering I have gone through, I can’t control my emotions and that is why I am crying.”

In all, the assembly presented start-up tools and equipment to 61 PWDs in the area at a valued of GH¢76, 200 in a bid to improve their living standards.

Some of the beneficiaries also received cash to invest in their businesses, pay medical bills and school fees and purchase life support devices. 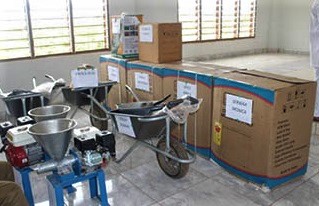 The presentation, which was funded from the three per cent of the assembly’s share of the District Assemblies Common Fund (DACF), was to support the beneficiaries to start their own businesses, and reduce poverty among them.

According to the assembly, since 2018, it had presented working tools and equipment to more than 800 registered PWDs in the area to improve their living standards.

The items were presented according to what the beneficiaries requested and was assessed by the assembly’s Department of Social Welfare.

Presenting the items, the Sunyani West Municipal Chief Executive (MCE), Evans Kusi Boadum, explained that economic activities by the beneficiaries would contribute to the improvement of the economy in the municipality.

He, therefore, advised the beneficiaries not to sell the items but rather use them for the intended purposes, so that their lives and the local economy will be improved.

Mr Boadum said the assembly would continue to monitor their activities, give them the needed guidelines and advise them on ways to improve their businesses.

He added that the assembly was working hard to ensure that all the registered PWDs in the municipality received their share of the items, and appealed to those who were yet to get their items to exercise patience.

Mr Boadum encouraged the PWDs not to be disappointed about their conditions, explaining that their situation was not their fault and could happen to anybody at any time.

For his part, the Chairman of the Sunyani West PWDs, Isaac Owusu Ansah, appealed to the government to deploy interpreters at public places, especially health centres, police stations and courts, to assist hearing impaired persons with interpretation.

He said there were some instances where some of their members were given wrong medications, jailed or remanded because of the lack of understanding or interpretation among them and institutions.