Ekumfi Fruits not shut down — Official 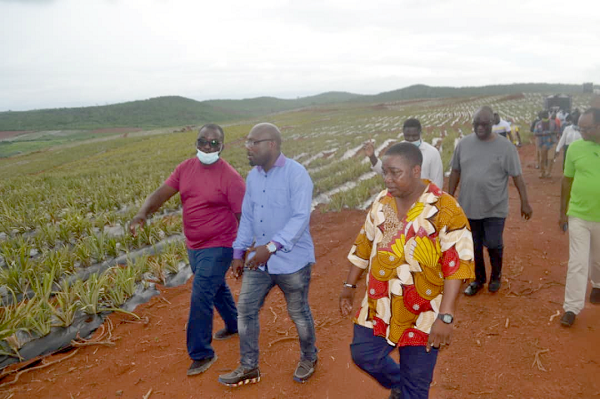 Mr Frederick kobbyna Acquaah (left), Director of Operations of the factory, interacting with journalists during a tour of one of their farms.

The Ekumfi Fruits and Juices Limited in the Central Region is producing at half capacity.

This is due to inadequate raw materials to feed the factory, resulting from climate change induced prolonged drought in the crop production areas, which has hugely affected the size of the pineapple fruit.

The Director of Operations of the company, Mr Frederick Kobbyna Acquaah, explained that the company had not shut down its operations.

“It is untrue that the company had shut down its operations as has been widely spread across the country. What the company experienced recently was a reduction in production due to severe drought which affected its raw material supply,” he stated.

Mr Acquaah was speaking in an interview with the media during a tour of the factory and its farms by officials of the Agricultural Development Bank (ADB), some distributors of their products and a team of reporters last Wednesday.

He said that there was no doubt that Ghanaians had accepted their products which had increased demand for their various product variants, and that the company was putting in place pragmatic measures to meet the market demand.

“I, therefore, urge the media not to be overly interested in throwing out negatives about. They should rather join hands with the company in its quest to produce natural fruit juice locally to meet international standards” Mr Acquaah said.

The Ekumfi Fruits and Juices Ltd is the first factory to be constructed under the government's One-district, One-factory (1D1F) initiative after President Nana Addo Dankwa Akufo-Addo on August 28, 2017 cut the sod for the construction of the factory .

The Ghana Exim Bank supported the construction of the factory with a GH¢60 million loan facility which fast-tracked its completion and subsequent production of natural fruit juices for the Ghanaian market.

Also, the ADB has provided another facility to the factory to expand its farms to be able to undertake an all year production to meet the demand of the ever-growing market.

When the team of reporters got to the factory, it was observed that production of the various products was ongoing as the workers were busily packing them for onward transportation to distributors.

Mr Acquaah appealed to the media to be circumspect in their reportage about the factory and desist from publications that tended to run the factory down, saying “it is a very worrying development that a section of the media reported that the factory had shut down its operations”.

“I wish to urge the media to reach out to the company at all times instead of churning out falsehoods which had the tendency of derailing the company’s efforts to become the biggest indigenous fruit juice manufacturing company.”

Mr Acquaah said that the factory was currently undertaking massive expansion of its farms with a loan facility from ADB so as to position the company to have the needed raw material for processing.

He explained that about 6,000 acres had been cultivated at all the 21 sites of the factory so that enough raw materials could be produced to feed the factory.

“I can assure you that we are working towards expanding it further to 9,000 acres so that the raw material base could be increased to sustain the operations of the factory,” Mr Acquaah said.

For his part, the Head of Agric Value Chain Finance Department of the ADB, Mr Lawrence Dankyi-Ansong, said that the bank was pleased to offer the financial facility to take care of some of the capital expenditure of the factory.