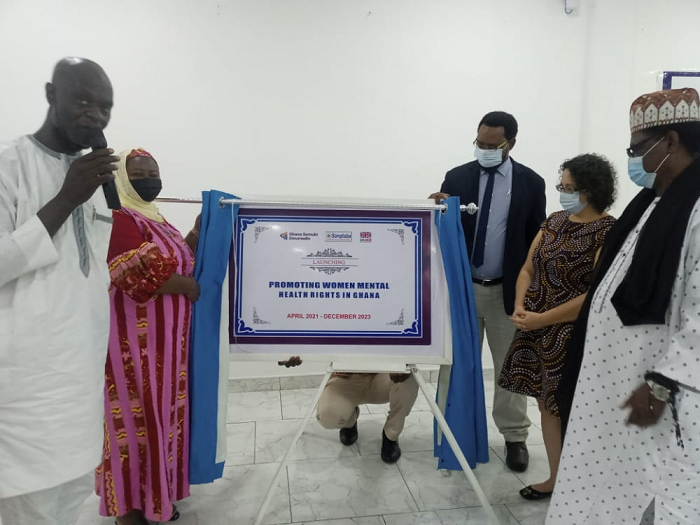 Hajia Lamnatu Adam (2nd left) , Executive Director , Songtaba unveiling a plaque to launched the project. With her in the picture are Alhaji Shaibu Alhassan Shani, the Northern Regional Minister (left). On the right is Mr Lawrence Akubori ( in suit),Ms Lyle Kamara (middle) all of the Ghana Somubi Dwumadie and Dr. Al-Hussien Zakaria (third right), a member of the Northern Regional Peace Council.
30.5k Shares

Songtaba, an advocacy organisation working to secure the basic rights of women and children, has launched a four-year disability programme in Ghana with a specific focus on mental health.

The project titled, "Promoting women mental health in Ghana", is focused on women that have been accused and banished from their communities to live in witches camps.

The project which is being supported by the United Kingdom Agency for International Development (UKAID), would be implemented in the Yendi and the Gushegu municipalities and the Nanumba South District in the Northern Region and East Mamprusi municipality in the North East Region where the alleged witches camps are located.

The project is to improve access to mental health care, psychosocial support and counselling services to the alleged witches and their caregivers in the targeted communities who have limited access to these services.

A consortium of organisations comprising of Basic Needs-Ghana, Kings College London, Sightsavers International and Tropical Health are the other partners in the implementation of the project.

At a ceremony in Tamale to launch the project last Wednesday, June 30, 2021, the Executive Director for Songtaba Hajia Lamnatu Adam, said the project will focus on promoting stronger policies and systems that respect the rights of people with disabilities, including people with mental health disabilities.

Hajia Lamnatu Adam lamented that woman living in exclusion including alleged witches and their caregivers in the target communities have limited access to mental health care, psychosocial support and limited counselling services.

To that end, Hajia Lamnatu said the project will promote the formulation and implementation of health policies that address women's basic mental health needs in Ghana by December 2023.

“It will also build evidence on women and mental health-prevalence, drivers, and responsive measures in Ghana by December 2023” she further stated.

The Northern Regional Minister, Alhaji Shaibu Alhassan Shani in an address said “the non-operationalisation of Legislative Instrument for the mental health act still remains a stumbling block to the effective delivery of mental health care services”.

He said Mental Health delivery remain a critical component of human development and urged the various Metropolitan, Municipal and District Assemblies (MMDAs) to as part of their medium-term development plans put in strategies to address the challenges of mental health delivery in Ghana.

The Northern Regional Minister announced that plans were far advanced by the government to build some mental health facilities across the country and Tamale is expected to benefit from this initiative.

Programme Lead at Ghana Somubi Dwumadie , Ms Lyla Kamara for her part said they were committed to working to eliminate stigma associated with disabilities including mental health and marginalized groups in Ghana.

She indicated that Ghana Somubi Dwumadie partnership with Songtaba will also influence the implementation of existing laws and policies on mental health care in Ghana by December 2023.

She further stated that the project will improve access to mental health care related service delivery to about 640 women including alleged witches in the Northern and North East regions.