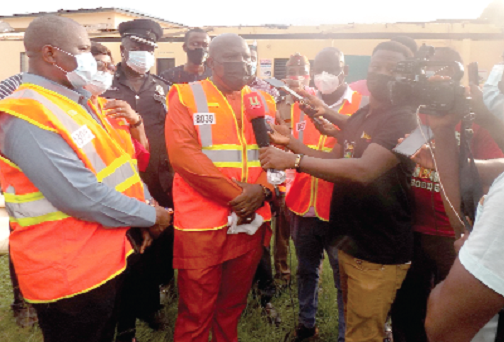 The Eastern Regional Minister, Mr Seth Kwame Acheampong, was at Akyem Oda last Tuesday to inspect the extent of damage to property caused by a rainstorm that hit Akyem Oda last Monday afternoon.

He was accompanied by the Eastern Regional Director of the National Disaster Management Organisation (NADMO), Mr Kwame Kodua, and the Member of Parliament (MP) for Akyem Oda, Mr Alexander Akwasi Acquah, and the Municipal Chief Executive (MCE) for Birim Central, Ms Victoria Adu.

Among the places Mr Acheampong visited was the Attafuah Senior High School (SHS) which was the worst hit in the rainstorm.

The roofs of the school’s boys and girls dormitories and the administration and library buildings  as well as the headmaster’s bungalow and that of some tutors were ripped off in the storm.

Addressing the staff, students and pupils of the affected schools at separate ceremonies, Mr Acheampong said he was sorry for their loss and that the President, Nana Addo Dankwa Akufo-Addo, had been notified .

He assured the students that their schools would be rehabilitated within the shortest possible time for normal academic work to resume.

Following concerns expressed by the Headmaster of the Attafuah Senior High School, Mr Francis Koomson Barnes, regarding a power cut to the school and which had disrupted water supply, the regional minister placed a phone call to the regional heads of both the Electricity Company of Ghana and the Ghana Water Company Limited and asked that both power and water be restored to the school soon for academic work to resume in earnest.

Mr Acheampong  was happy that there were no casualties as a result of the rainstorm and also that the 12 students who got injured had been treated and discharged from the Oda Government Hospital.

He met with a section of victims of the rain disaster at Oda Old Town and commiserated with them.

He also paid a courtesy call on the Oda Zongo Chief, Alhaji Sulemana Adamu, and his elders and assured them that the government would assist them to repair their damaged buildings.

The eastern regional minister commended the MP, Mr Akwasi Acquah, and the MCE, Ms Victoria Adu, for informing him immediately the disaster struck and for also mobilising volunteers for a rescue mission.

Most parts of the Akyem  Oda municipality have been without electricity since last Monday because the wooden electricity poles and cables that carried power were destroyed in the storm.