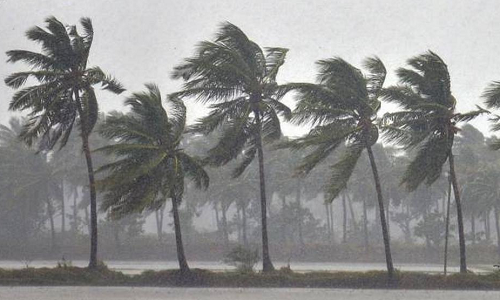 Moderate to heavy rains swept across the country from the early hours of yesterday, but with minimal destruction and no casualties.

Kwahu Tafo in the Kwahu East district in the Eastern Region recorded the highest amount of rainfall, 129 millimetres (mm), while the Airport area in Accra recorded the lowest of 26mm, according to figures gathered by the Ghana Meteorological Agency (GMA) as of 2 p.m. yesterday.

While Accra was spared its perennial flooding after such downpour, as a result of the extensive dredging of storm drains around the city, in the Upper East Region, the downpour left in its trail uprooted trees and collapsed buildings around Zaare, a suburb of the Bolgatanga municipality, Binaba and Zebilla.

According to a meteorologist at the Central Analysis and Forecast Office of the GMA, Mr Joshua Asamoah, the storm emanated from the eastern part of Nigeria and moved across Benin and Togo before reaching Ghana last Wednesday night and persisted for hours until yesterday.

The rainstorm, which the GMA had forecast last Wednesday morning, was heaviest in the Eastern Region, with Kitase and Aburi recording 78mm and 70mm, respectively, the second and the third highest rainfall.

"It was basically the entire country. It started just about midnight, around 11.30 p.m. and 12 midnight in the eastern part of the country, the North East and the Northern regions, parts of the Oti Region and then few areas in the Eastern Region," Mr Asamoah said.

Later, the rain drifted to the western side of the country, watering the Savannah, Upper West, Bono East, Bono and Ahafo regions, and then to the south, felt in the Volta and the Greater Accra regions, he said.

The meteorologist said before noon yesterday, most parts of the country had experienced the rains, and as of the time of filing this report about 3 p.m., it was still raining in the northern part of the country, with cloudy conditions in the south.

"The northern parts are still in their rainy season, so it's possible that they are going to get some rains, but it's not going to be every day. Because we are in September, they are gradually exiting from their major rainy season. The rains will subside in September and October before we enter the dry season in December,” he explained.

According to the weather analyst, the southern part of the country was now entering its minor rainy season, to be experienced in September, October and November.

“So this is like the onset of the rains for southern Ghana, but the intensity of the rains will reduce with latitude as the months go by. For now, the northern parts are getting the heaviest of rainfall," he pointed out.

The rainstorm, which swept through almost the entire Upper East Region, started about 2 a.m. yesterday and ended after about five hours.

Besides the fallen trees and buildings in the Bolgatanga municipality, Binaba and Zebilla, parts of the region also experienced power outages, with many residents unable to continue their sleep because of the associated scare.

However, power was restored in some parts of the region hours after the storm.

The Upper East Regional Director of the National Disaster Management Organisation (NADMO), Mr Jerry Asamani, told the Daily Graphic that the organisation had not completed listing the number of houses affected, as officials were still on the ground to help resolve issues related to the rainstorm.

The NADMO also liaised with the relevant institutions to cut trees that had fallen across roads with chainsaw machines to free traffic.

Some of the residents shared varied sentiments about the storm and its attendant inconvenience.

A grocery shop operator at Tanzui in the Bolgatanga municipality, Mr Baba Yakubu, said he could not sleep when the rainstorm started because he was worried he could lose his shop and all the items in it.

The Greater Accra Regional Director of NADMO, Mr Archibald Kobina, told the Daily Graphic that no casualties were recorded after the rains.

He said there was no destruction to property in the region as the flood waters receded shortly after the downpour.

That, he said, was due to the many interventions of the government, such as the construction of drains in areas such as Ablekuma, Mallam and Adentan municipalities and regular desilting.

The Operations Manager of Dredge Masters Ltd, Mr Sena Kofi Adiepena, told the Daily Graphic that flooding in Accra had reduced due to efforts by the government to maintain storm drains and desilt rivers and lagoons during both the dry and the rainy seasons.

Under the Accra Sanitary Sewer and Stormwater Drainage Alleviation Project, he said, Dredge Masters had, since 2016, undertaken “maintenance dredging” works on some selected drains in the capital city that were prone to flooding to keep them at their original design capacity.

He said similar works were being carried out in the Odaw River and the Lower and Upper Korle lagoons to rid them of debris and rubbish, which had built up in them due to human activities.

“The rate of siltation or the build up of rubbish and debris in these drains reduces their design capacities, so the volumes of water that they can take also reduce,” he said.

Mr Adiepena explained that the continued desilting had significantly maintained the capacity of the drains to contain the volumes that run through them during heavy rains.

Meanwhile, a Daily Graphic team that monitored the flooding situation in some flood-prone areas, such as Odawna, the Graphic Road, Adabraka, Kaneshie and around the Kwame Nkrumah Interchange, did not encounter flooding at those places, in spite of hours of downpour.

The Odaw River drain begins at the Caprice bridge at Alajo and runs 10 kilometres to the edge of the Korle Lagoon, from where the river enters the sea.