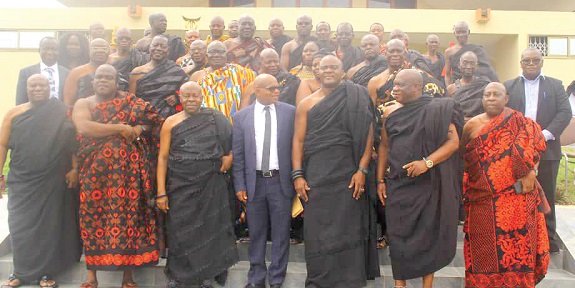 Ogyeahohuo Gyebi ll (3rd from left), Dr Ato Arthur (middle) and Odeefou Amoakwa Buadu (3rd from right) together with other members of the Central Regional House of Chiefs Follow @Graphicgh

The President of the National House of Chiefs (NHC), Ogyeahohoo Yaw Gyebi II, has said chiefs must remove under-development from the communities by working to amicably resolve conflicts.

He observed that chieftaincy disputes continued to unleash pain and derail development in affected communities.

The situation further created unnecessary tension, conflict and clashes, leading to the use of scarce resources by the government to maintain peace, he noted.

Ogyeahohoo Gyebi was speaking at the General Meeting of the Central Regional House of Chiefs in Cape Coast on Tuesday, April 13, 2022.

He said worrisome actions and inaction by some chieftaincy factions which had the tendency to bring about disputes and conflicts should not be fanned.

Ogyeahohoo Gyebi, who is the Paramount Chief of the Sefwi Anhwiaso Traditional Area, said the NHC was not happy that chiefs, as custodians of the values and aspirations of the people, were sometimes the source of tension and conflict in the country.

He said the situation had led to some people disrespecting the chieftaincy institution, saying that "if chieftaincy is to be respected by politicians, chiefs must themselves live honourable lives”.

He asked chiefs to consciously work to contribute to the development and wellbeing of their people.

He also called for voluntarism to be reactivated in the communities to engender self-help for development of those communities.

The NHC President urged paramount chiefs to desist from infiltrating clan kingmakers during the selection of chiefs, adding that all must follow the right procedures in enstooling chiefs.

He also called on chiefs to champion discipline in the communities.

The President of the Central Regional House of Chiefs, Odeefuo Amoakwa Buadu VIII, said the house had taken steps to resolve all chieftaincy disputes.

He said it would do more to promote peace, safety and development.

The Central Regional Minister, Justina Marigold Assan, commended the regional house of chiefs for its immense contribution to the development agenda of the region.

She appealed to the house to support the agenda to transform the region's educational, sanitation, health and tourism sectors for prosperity.

Mrs Assan urged the chiefs to help instill in the youth discipline to promote development.

The Minister of Transport, Kwaku Ofori Asiamah, said the government was working to improve infrastructure at the beaches with the construction of landing sites.

He gave an assurance that the airport project for the region would kick off by early 2023.

The minister also urged the chiefs to join in the campaign to reduce road fatalities.

The Head of the Local Government Service, Dr Nana Ato Arthur, appealed to the chiefs to support efforts at accelerating development in the communities.