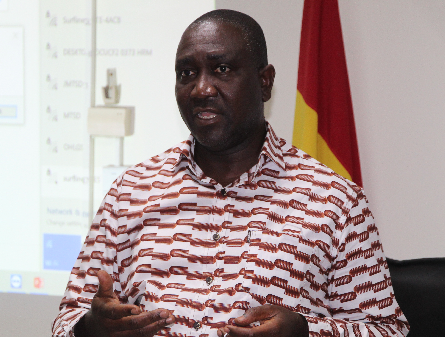 The Executive Secretary of the National Media Commission (NMC), Mr. George Sarpong, has cautioned the media against reportage that created the impression that the upcoming elections signalled danger ahead for the country.

He said the more the media communicated danger to the people, the more the reality of danger was created in their minds, adding: “If we mislead people into thinking that the elections will pose a danger, everybody then begins to prepare by arming himself or herself.”

Mr. Sarpong said this at a meeting in Accra yesterday to introduce the Ghana Elections Monitoring App to journalists.

He said the real issue concerning the elections was the lack of understanding of the subjects for debate or discussion.

Mr. George Sarpong (at head of the table), the Executive Secretary of the National Media Commission, addressing some journalists at the meeting. Picture: ESTHER ADJEI

According to him, this year’s elections ought to pass off peacefully and so there was no need to create fear and panic among the electorate.

“I have been working on elections in Africa for the last 20 years. Anybody who understands elections will tell you that this year’s elections in Ghana are going to be one of the safest so far.

“Do you know why? In every election, the question of whether or not you are going to have difficulty is determined by the degree of grievances immediately preceding the election. By this time in 2016 we were in court over the electoral register and transparency issues. As we sit currently, there are no major issues the political parties are fighting over,” he explained, and added that there was nothing complicated about the this year’s elections.

Explaining why there was the need for the Ghana Elections Monitoring App, Mr. Sarpong said the app had been developed to allow people to independently verify facts regarding issues that would come up during the elections.

He said the app was important to the elections because it could help resolve conflicts, as claims and counter-claims could be easily verified from it in the character of showing the place, time and date they occurred.

“We have developed this system for the media and for incidence reporting during the elections. We think it will be extremely useful in helping to secure transparent and peaceful elections.

“In a certain sense, it will also help address fake news and disinformation and also assist to authenticate materials that people submit,” he said.

Mr. Sarpong encouraged media personnel to create awareness of the new app in order for many people to subscribe to it to monitor the upcoming general election.

That, he said, would, among other things, encourage people to use the mobile app to record incidents and thereby prevent unscrupulous people from engaging in criminal acts that could undermine the smooth conduct of the elections.

The Chief Executive Officer of Soft Masters, the technology company that developed the app for the NMC, Dr. Ben Adu, described it as a very significant working tool that was good in quality and performance.

He said the camera and video button on the system did not get activated until the time and location of whatever one was recording had been stamped on it.