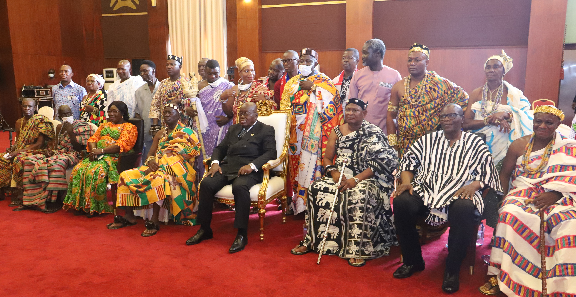 The Paramount Chief of the Ave Dakpa Traditional Area in the Akatsi North District in the Volta Region, Torgbui Nyamekor Glakpe V, has said even though the people of the area did not vote massively for the New Patriotic Party (NPP), the President, Nana Addo Dankwa Akufo-Addo, has brought unprecedented development to the area.

“Mr. President, it is not palatable to say this, but the point needs to be made, that you did not win any votes in our district or nearly so in previous elections, yet the area has not been discriminated against insofar as the spread of development is concerned,” he added.

Torgbui Glakpe, who is also the President of the Ave Council of Chiefs, made the assertion when he led chiefs and queenmothers from the traditional area to pay a courtesy call on the President at the Jubilee House last Monday.

He said the visit was to thank the President for bringing development to the Ave Dakpa Traditional Area and to also invite him to Ave Dakpa to be installed Development Chief for the work his government had done in the area.

“Communities such as Avevoe, Hadave and Nuaxorve have, for the first time, had three-unit pavilion classroom blocks constructed in each of the communities. There have been schools in the communities, to begin with, but no classrooms,” he said.

He said the government had made it possible for the schools to have classrooms, and that had boosted education in the communities.

Torgbui Glakpe said other communities, such as Seva, Ave Have, Atanve, Amule, Kpegbadza and Adzigo, had also had three-unit pavilion classrooms built for them.

“The GETFund has also completed six-unit classroom blocks that were begun by the previous government at Atiglime, Agormor and the Ave Senior High School,” he said.

He also said the government, using the GETFund, had made funds available for the construction of six-unit classroom blocks at the Islamic School at Ave Afiadenyigba, Ave Dzadzepe and Ave Seva and also established kindergartens (KGs) at Ave Kpeduhoe, Ave Posmonu and Lome-Ghana.

“There are communities in the Akatsi North District that have, for the first time, received mechanised boreholes to improve their supply of potable water. In fact, Lome-Ghana, Atsata Bame, Ashiagborvi, Zemu, Kortey and Agormor can also now boast improved access to potable water, courtesy of the Nana Addo Dankwa Akufo-Addo-led government and through Dr. Prince Sodoke Amuzu, the District Chief Executive,” he said.

He acknowledged the fact that the government had constructed a modern market, an abattoir, 20 stores, a KG and a borehole at Ave Dakpa.

Torgbui Glakpe commended Dr Amuzu for his excellent and respectful relationship with chiefs and for spearheading extensive developments in the district.

He described the government’s decision to add the Akatsi North District to the districts that would benefit from the planned 88 district hospitals to be built as a dream come true because “our top-notch healthcare facility in the district is the Ave Dakpa Health Centre”.

He said the traditional leaders in Ave Dakpa had released a 25-acre land to the Akatsi North District Assembly for the project and were anxiously waiting to have the sod cut for commencement of work.

President Akufo-Addo saluted the chiefs for their strong words of commendation for the good work he was doing, together with his government and his appointees.

He said he was honoured and grateful for the decision by the chiefs to honour him Development Chief and assured them that he would find time to visit them and receive the honour in the course of time.