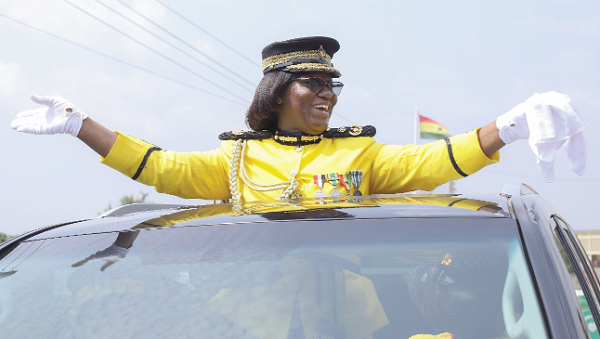 Mrs Josephine Fredua-Agyeman, the outgoing Deputy Director-General of Prisons in charge of Finance and Administration, during the colourful pull-out service Follow @Graphicgh

The outgoing Deputy Director-General of Prisons (DDGP) in charge of Finance and Administration, Mrs Josephine Fredua-Agyemang, has called on officers to strive for success in their work.

“It is not enough to limit yourselves within the confines of our everyday routine but to activate your creative minds, develop a strong will and resilience, and go all out to plan and execute programmes and projects that will drive the Service to achieve its mandate,” she said.

She gave the advice at the a pull-out ceremony the service organised in her honour to appreciate her distinguished service to the Prisons Service and the country.

DDGP Fredua-Agyemang was honoured with a citation presented to her by the Director-General of Prisons, Mr Isaac Kofi Egyir, in appreciation of her 32 years and 13 days of meritorious service to the nation.

Expressing her gratitude for the unwavering support given her over the years last Friday at the Prisons Officers’ Training School, DDGP Fredua-Agyemang commended staff of the Ghana Prisons Service for their role in ensuring the welfare, reformation and rehabilitation of inmates.

She was also full of praise for the Church of Pentecost for its immense support and massive infrastructural developments being carried out to ease congestion in the prisons.

Mrs Fredua-Agyemang urged officers to continue to work hard, be open-minded and always exhibit professionalism in carrying out their duties as correctional officers, so that inmates entrusted in their care would leave reformed, rehabilitated and return to society as law-abiding citizens with value added to their lives.

She, however, deplored some challenges that militated against the effective running of the service such as inadequate operational and utility vehicles, lack of training opportunities for officers, inadequate workshops to equip prisoners with employable skills, inadequate healthcare facilities, lack of logistics such as body scanners and close circuit television (CCTV) cameras, among others.

Mrs Fredua-Agyemang appealed to the President, Nana Addo Dankwa Akufo-Addo, to support the service to overcome the challenges.

She also called on individuals and corporate bodies to partner the service in the areas of agriculture, health, building and construction, education and sanitation.

“I wish to emphasise that ameliorating the above mentioned operational and logistical challenges is crucial to enhancing the capacity of the Prisons Service to fulfil its constitutional mandate,” she stressed.

She held other command positions, including the Western Regional Commander and Officer in charge of Sekondi Central, Kumasi Female, Nsawam Female and Sunyani Female Prisons and Ag. Commanding Officer of Prisons Headquarters.

During her administration as the Prisons Ladies Association (PRILAS) President, the association saw a tremendous growth in size and in assets which have contributed positively towards the standard of living of female officers.

During her service with the GPS, she was decorated with four medals in recognition of her hard work and commendable service to the country.

Present at the ceremony were the Justice of the Supreme Court, Justice Mr Paul Baffoe-Bonnie; Justice of the Appeal Court, Justice Novisi Aryene; a member of the Council of State, Professor Margaret Ivy Amoakohene; the Chief Director of the Ministry for the Interior, Mrs Adelaide Anno Kumi; the Deputy Comptroller-General of Immigration in charge of Legal and President of the Immigration Ladies Club, Ms Victoria Baaba Asare; the Deputy Comptroller-General in charge of Finance and Administration, Mr Isaac Owusu Mensah; the Director in charge of Welfare of the Ghana National Fire Service (GNFS), Deputy Chief Fire Officer (DCFO), Mr Tony Gomez, and representatives of other sister security services.