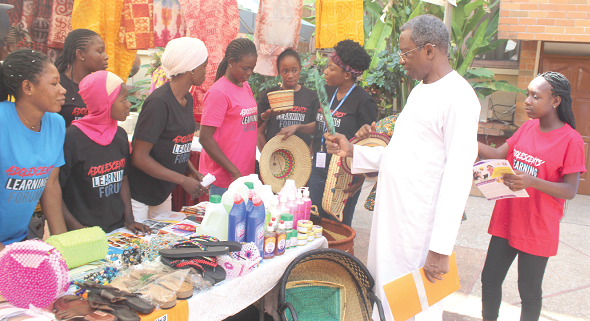 Barnabas Yisa (2nd from right), Country Representative of the United Nations Population Fund, inspecting some of the items made by the girls during the ceremony. With him is Abigail Edem Hunu (3rd from right), Programme Assistant for Gender at UNFPA. Picture: ESTHER ADJORKOR ADJEI
30.5k Shares

The Programme Assistant for Gender at the United Nations Population Fund (UNFPA), Abigail Edem Hunu, has stated that shifting and reshaping the minds of adolescent boys through a deepened engagement with them will help end gender inequality.

She stated that while stakeholders worked on engaging young girls and women on gender issues such as early child marriage, it was important to also engage and sensitise men, especially adolescent boys, to appreciate the fight against gender inequality.

Ms Hunu, who was speaking at the UNFPA Adolescents’ Learning Forum for legislators and delegates in Accra, said although there had been many efforts by stakeholders to end issues related to young adolescent girls, the efforts seemed not to be getting the needed results, adding that engaging men and boys had been found to have the highest potential in gender transformative change.

“You will be surprised that some of the men and boys do not know the effects and consequences of these things we speak of, so when we start having these conversations with them, it can shift their minds so that they can be allies in achieving gender equality,” she said.

She added that that could be achieved through promoting positive masculinities by expanding community engagement and safe space programmes and strengthening a coalition for more male engagement.

It also brought together key stakeholders and partners in addressing adolescent and gender-based issues.

The Country Representative for UNFPA, Barnabas Yisa, said the forum since its inception had created a safe space for adolescent girls from the child marriage programme communities across the country to reflect on their journey, share their practical experiences and propose solutions towards zero child marriage and teenage pregnancy in the country.

He added that focusing on adolescent boys just as much as adolescent girls, considering the critical role men and boys played in combating sexual and gender-based violence, was crucial to ending child marriage.

He said that could be done by adopting a gender-transformative approach that promoted both the empowerment of girls and women and positive masculinities.

“Our collective effort in working with implementing partners, government, development partners and relevant stakeholders to advocate and support practical actions to end child marriage and promote gender equality and the empowerment of adolescent girls remains crucial,” he said.