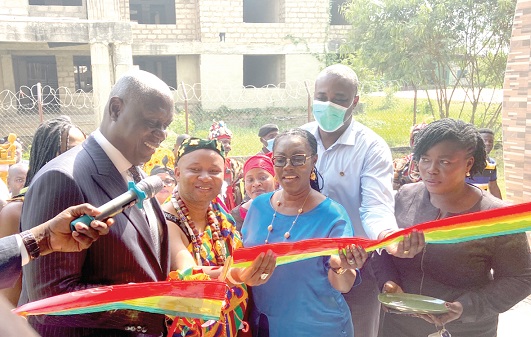 Kwesi Anin Yeboah (left), the Chief Justice, being assisted by Ursula Owusu-Ekuful (3rd from left),MP for Ablekuma West, and Nii Adote Odaawulu I of the Sempe Traditional Council, to cut the tape to inaugurate the new court building
30.5k Shares

The Judicial Service has inaugurated a new Circuit Court building at Dansoman in the Ablekuma West Municipality in the Greater Accra Region.

Funded from the District Assemblies Common Fund, the court will handle cases within the municipality and surrounding communities.

Last Thursday’s inauguration of the court, located behind the Dansoman Keep Fit Club, was witnessed by the Chief Justice, Kwasi Anin Yeboah, some members of the Judiciary, the municipal assembly and traditional leaders.

The Chief Justice said the new court building was part of the Judicial Service’s vision to enhance citizens’ access to quality service by establishing courts in close proximity with community members.

Justice Anin Yeboah added that the structure formed part of 100 court buildings being financed by the government to address the deplorable state of the country's courts and also increase the court’s availability to serve the citizenry.

The Chief Justice further said that the court was the fifth gender-based court handling cases of violence against women and children.

"This Circuit Court, as designated, is going to offer our staff a good working environment with all the modern facilities you can think of. It will later in the year be fitted with state- of-the-art ICT equipment to enable it to also function as a child-friendly, gender-based violence court to enhance accessibility by the vulnerable in society who are mainly women and children when they suffer domestic or sexual abuse," he added.

Justice Anin Yeboah further said that the court, which would also handle both civil and criminal cases, would bring relief to the police, especially people in the Ablekuma West, Ablekuma Central and Ablekuma North constituencies.

"I urge you all to ensure that the investment in this court is well protected. Every user of the facility must exercise utmost care and treasure the resources spent," he added.

The Member of Parliament for the Ablekuma West Constituency, Ursula Owusu-Ekuful, said it had been her mission to transform the area into a model municipality to facilitate commerce and development.

"We are very well aware of the challenges we face as a people. And I am also happy to say that we have made modest effort and progress to tackle those challenges systematically over the last few years.

"This will be the first circuit court to be part of the Justice system as we facilitate the implementation of E-justice. This has come to our constituency and we must ensure that we benefit from it," Mrs Owusu-Ekuful said.

The Sempe Muslim Akwarshontse of the Sempe Traditional Council, Nii Adote Odaawulu I, gave an assurance that the traditional council will not interfere in the work of staff but rather support them to administer justice to ensure law and order in the municipality.

He also advised the people not to take the law into their own hands but report all cases to the police for due process to ensure fairness.