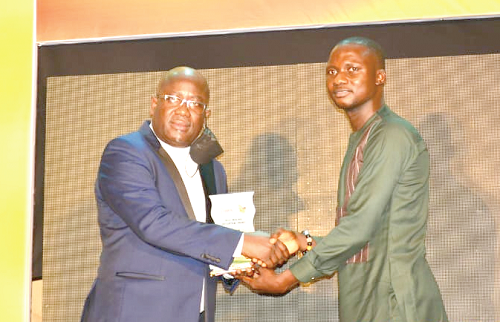 It was the second successive time that he had won the award.

The GMIA is an awards scheme by the Ghana Chamber of Mines (GCM) to reward outstanding firms and individuals who make significant contributions to the country's mining sector.

The award for mining reporter of the year, which was opened to journalists working in any medium (print, online, radio, television and multimedia), celebrated excellent journalistic reports, features and documentaries that focused primarily on the mining industry in 2020.

According to the criteria spelt out by the GMIA Award Committee, the winner of that category must have demonstrated an understanding of the mining industry in areas such as the contribution of mining to national development, responsible mining practices, environmental management in mining and sustainability, as well as community development and corporate social investments of mining companies.

Per the criteria, the winning piece is to meet the principles of news value, impact, objectivity and rigour in reporting, specialist knowledge, analytical value, originality and integrity.

The Managing Director of Golden Star Wassa Limited, Mr Shadrach Adjettey Sowah, who emerged the mining personality of the year, presented a plaque and a cheque for GHc5,000 to Mr Ngnenbe as his reward.

The two feature stories Mr Ngnenbe presented for the award were titled: “Galamsey: Let's kill this monster before it kills us”, and “Galamsey: When two elephants fight, the grass suffers”.

The stories highlighted the devastating impact of illegal mining on land and water resources, the negative impact the menace had on climate change and the achievement of the Sustainable Development Goals (SDGs).

Mr Ngnenbe cited instances of turf wars among duty bearers and how such a development had fueled the galamsey menace.

At the same event, Joy News' Iddrisu Latif won the television category of the award.

An engineer at AngloGold Ashanti, Ms Margaret Aniawu-Asomakah, was adjudged the best female mining professional of the year.

A former Chief Executive Officer (CEO) of the Minerals Commission and advisor on mines to the Minister of Lands and Natural Resources, Mr Benjamin Nii Ayi Aryee, took home the lifetime achievement award.

For the students category, which was reserved for mining students in the University of Mines and Technology (UMaT), Abdul-Rahman Issak and Ms Felicia Maame Amonor won the best male and female mining student awards, respectively, while Jacob Atawin Abare picked the prize for best graduate research.

Speaking at the event, the CEO of the GCM, Mr Sulemanu Koney, commended mining companies and individuals for contributing to the development of the mining industry.

He said the mining industry was the backbone of the local economy and would serve as the major driver of industrial growth.

He observed that the mining sector had a huge potential that needed to be tapped to create opportunities for job creation in all other sectors.

On that score, Mr Koney said the GCM would continue to collaborate with other stakeholders to transform the economy.

He called on the Minister of Tourism, Dr Awal Mohammed, to revive the Gold Museum Committee that was set up a few years ago to help unlock the tourism potential of the mining industry.