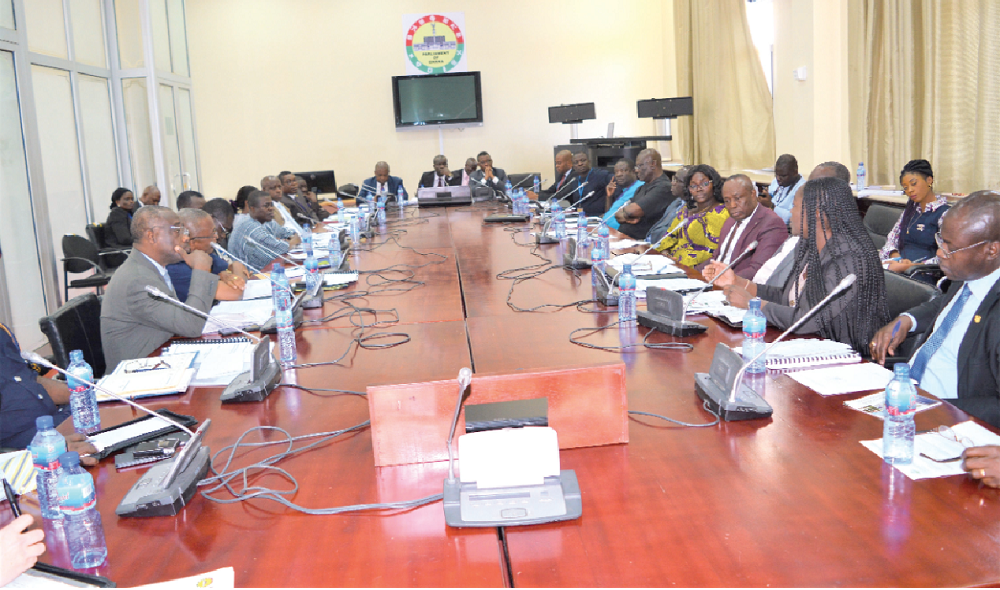 Mr Titus-Glover (middle), the Chairman of the committee, with Mr Fifi Kwetey (right), the Ranking Member of the committee, listening to the presentations by the stakeholders during the meeting. Picture: DELLA RUSSEL OCLOO
30.5k Shares

The Customs Division of the Ghana Revenue Authority (GRA) has started removing customs barriers along the country’s transit trade routes, in line with reforms at the entry ports and trade routes.

The division has, however, suggested the necessity to maintain four of the 60 intercepting barrier points.

The four are located at Dabala in the Volta Region, Savelugu in the Northern Region, Offinso in the Ashanti Region and Matekuku in the Western Region.

According to the acting Commissioner of Customs, Mr Isaac Crentsil, the four barriers that would be retained would be useful for checking armed robbery and smuggling and the movement of illicit arms.

Mr Crentsil made the disclosure at a meeting with the Parliamentary Select Committee on Trade, Industry and Tourism in Accra last Wednesday.

The meeting was at the behest of the committee and attended by other stakeholders, such as the Ghana Community Network Services (GCNet) and West Blue Consulting, both technical providers in the trade chain; the Ghana Ports and Harbours Authority (GPHA), the Ghana Institute of Freight Forwarders (GIFF), the Ghana Standards Authority (GSA) and the Foods and Drugs Authority (FDA).

It was aimed at appraising the preparedness of the various groups for the September 1, 2017, deadline for the implementation of a three-pronged policy on port reforms instructed by the Vice-President, Dr Mahamudu Bawumia in May this year.

While all the agencies indicated their readiness for the September 1 deadline, the GAEC, on the other hand, pointed out that checks for contaminated food could only be done at the ports if the government assisted in the purchase of a gamma spectroscopy system device for on-field testing of imported food products as a means of ensuring that they did not contain any radioactive substance.

It implored the committee to impress on the government to set up a mobile laboratory equipped with the gamma device to avoid the situation where Customs and the EPA might be required to pick product samples to the GAEC Laboratory at Kwabenya.

Mr Crentsil said Customs was engaging the Ghana Immigration Service (GIS), the Ghana Police Service, the National Security, the Narcotics Control Board and MMDAs across the country on the need for them to do risk-based patrolling of the points where the barriers were being removed.

On the paperless initiative, he said it took off in 2013, but the submission of fictitious documentation onto the system by agents and importers and the lack of compliance by customs officials led to the suspension of the project.

“We realised people were putting in false declarations which posed a risk to revenue collection,” Mr Crentsil said.

He said freight forwarders were always eager to see every process of the transaction, leading to protestations against Customs.

“We have, however, learnt our lessons and are ready to enforce the rules to achieve true paperless processes in our trade facilitation activities,” the commissioner said.

Subsequently, he said, while sensitisation to the paperless processes and joint inspection were underway, the division would conduct a mop up exercise on the processes on July 31 and August 10, 2017, to update players in the sector ahead of the September 1 take-off.

The Chief Executive Officer (CEO) of West Blue, Ms Valentina Mintah, told the committee that her outfit, in collaboration with GIFF and Customs, had created a customs house agents management system (CHAMS), a platform agents and importers could use to register, apply for permits and renew licences electronically.

The Minister of Planning, Prof. George Gyan-Baffour, minced no words when he chastised GCNet and West Blue and described their posture as one that could be a setback to the implementation of reforms, following concerns over their unwillingness to integrate their systems for a smooth take-off.

He also wondered why the Customs Division failed to enforce its rules to bring agents to order.

The Chairman of the Select Committee and Member of Parliament for Tema East, Mr Daniel Titus-Glover, for his part, expressed worry over the refusal by the ministries of Finance and the Interior to be integrated onto the eMDA system and urged the two ministries to integrate their systems, so that they could monitor transactions going on in the trade and revenue chain.

He also urged GCNet and West Blue to look at the corporate interest of Ghana and get their systems integrated as soon as possible.