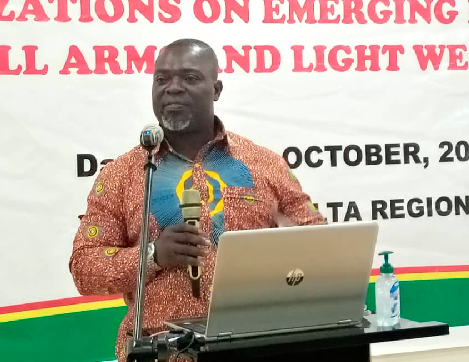 Civil society organisations (CSOs) have been urged to develop an evidence-based research for policy decisions to support government in the fight against illicit flow and proliferation of small arms and light weapons (SALW) in the country.

The issue of SALW, according to the National Commission on Small Arms and Light Weapons, had been a great concern to Ghana and the international community, and, therefore, a solid advocacy and research of the matter would put state actors on their toes.

Some participants at the event

At the opening of a three-day workshop in Ho to build the capacity of CSOs on emerging trends in small arms and light weapons, Mr. Applerh said a collective effort between state actors and CSOs would help nip the issue of illicit small arms in the bud and reduce gun violence in the country.

The workshop was also to enable the CSOs to lead the advocacy on guns and gun violence.

Although Ghana enjoys relative peace, many people have died of gun violence, and Mr. Applerh said the situation called for attention because many people had small arms in their various communities without authority.

That, he noted, was very dangerous for the country because any society where SALW was easily acquired also risked a high level of unwarranted deaths and violence.

Ghana, Mr. Applerh said, had signed onto various international instruments to combat illicit flow of small arms so CSOs should take interest in those policies and obligations and help in the fight.

He noted that the poor handling of issues concerning small arms could impact negatively on the development of the country as other countries, including Cote d'Ivoire, had suffered the harm of SALW proliferation.

Mr. Applerh said the commission had been working very hard to check the availability and abuse of small arms, but needed support from the CSOs for their impact to be felt in the country as their activities were well recognised at the international level.

According to him, reportage on recent activities, especially election-related ones where people abused guns, had raised concerns among security analysts about how Ghana could conduct a peaceful election this year.

He said a recent survey by the commission estimated that there were more than 2.3 million small arms in the hands of civilians per police database, but 1.1 million of them were illicit arms, meaning "we do not know who owns them, so we must make sure that they are not used to intimidate the electorate".

Elections, he noted, had been the major vehicle through which SALW had been abused around the world and as Ghana geared up towards the crucial 2020 elections, the issue should not be underestimated.

He said the issue of small arms should be of concern to all for a safe and peaceful Ghana.

"Therefore, as civil society actors, we want you to be aware of the situation at hand and work towards a peaceful election in order not to witness arms proliferation," he said.

Mr. Applerh said CSOs could improve the quality of policy making by providing state agencies with a wider spectrum of information, views and suggestions on how to deal with illicit small arms and voice the concerns and needs of the minority groups who might otherwise not be heard, including women and youth.

The deputy representative of the UNDP, Ms. Silke Hollander, said the government alone could not deal with the matter, which, therefore, required that the CSOs came on board with their in-depth knowledge.

In a speech read on his behalf, Mr. Baffour Dokyi Amoah, who chairs the International Action Network on Small Arms (IANSA), a global movement against gun violence, said to better understand the emerging trends in small arms and light weapons, a good analysis of supply and demand sides of small arms would be important.

The network, he announced, would launch a project in 2021 aimed at strengthening the contribution of CSOs and community leaders at the country level with parliamentarians, ministers and other authorities to develop national priorities for the next phase of UN programme of Action (PoA) implementation.

"We aim to strengthen UN PoA implementation, especially in the areas of ammunition, gender, sustainable development goals, armed violence, and synergies, among instruments," he said.