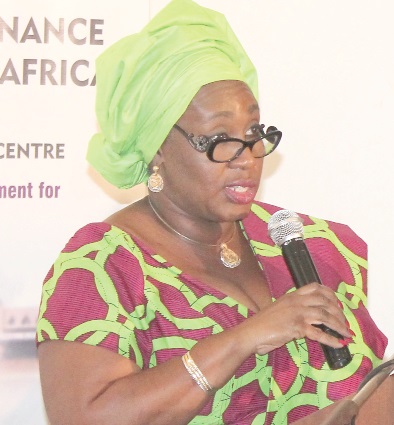 An attempt by state prosecutors to have a former boss of the Microfinance and Small Loans Centre (MASLOC), Sedina Tamakloe Attionu, tried in absentia is in limbo.

State prosecutors had filed an application for Mrs Attionu to be tried in absentia following her failure to attend the trial since October last year.

However, at last Monday’s hearing, the Accra High Court said it would not hear the application for trial in absentia until it determined another application seeking to hold the sureties who guaranteed Mrs Attionu’s bail responsible for her absence.

Mrs Attionu, who is on trial for allegedly causing financial loss of GH¢90 million to the state during her tenure as the Chief Executive Officer of MASLOC between 2013 and January 2017, has failed to show up for the trial after being granted permission by the court to travel to the USA for medical treatment.

She was expected to return to Ghana for the continuation of her trial on October 6 last year but is yet to show up.

In November last year, Justice Asare-Botwe expressed her displeasure about the situation and issued a bench warrant for the arrest of Ms Attionu to force her to attend the trial.

Afterwards, the prosecution filed an application for trial in absentia.

It then followed up with an application for forfeiture of recognisance, which is directed at the two sureties who executed Mrs Attionu’s GH¢5 million bail bond to show any justification why they should not be made to pay the bail sum due to her absence from the trial.

The two sureties for Mrs Attionu are Alex Mould and Gavivina Tamakloe.

The prosecution withdrew the first application for forfeiture and filed a fresh one.

At last Monday’s hearing, the prosecutor, Stella Ohena Appiah, a Principal State Attorney, told the court that the two sureties had been informed about the fresh application of forfeiture.

She, therefore, asked the court for a two-week adjournment to enable the prosecution to serve the sureties with the application.

The prosecutor also reminded the court about the application for Mrs Attionu’s trial in absentia.

Mrs Attionu is on trial with Daniel Axim, a former Operations Manager of MASLOC, on 78 counts of wilfully causing financial loss to the state, stealing, and contravention of the public procurement act, among other charges.

The prosecution has accused Mrs Attionu of engaging in some illegalities leading to the alleged stealing and financial loss.

For instance, it has accused Mrs Attionu of embezzling GH¢500,000 that was paid by a company which benefitted from MASLOC support in 2014.

It is also the case of the prosecution that in 2013 following a fire disaster at the Kantamanto Market, then-President John Mahama directed MASLOC to provide assistance of GH¢1.46 million to victims of the disaster but Mrs Attionu embezzled part of the money.