Council of State, Graphic, others mourn with Rawlings 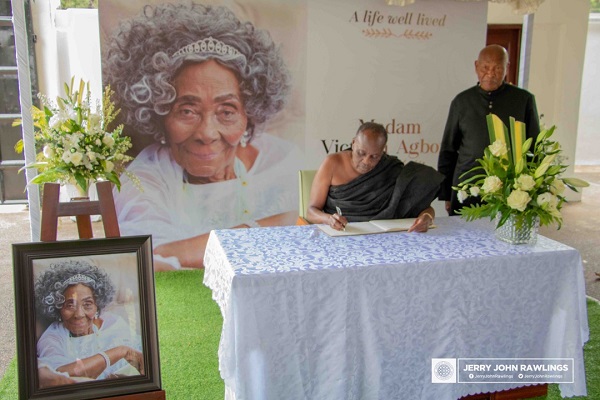 A delegation from the Council of State, led by its Chairman, Nana Otuo Sereboe II, the Juabenghene, called on former President Rawlings and the Agbotui family on Tuesday, October 6, 2020, to commiserate with them on the loss of Madam Victoria Agbotui, mother of the former President.

In his message to the bereaved family, Nana Otuo Sereboe noted that the loss of a mother is a painful experience, stating however that, “though you have lost your biological mother, you have a very formidable mother in the person of my sister, Nana Konadu Agyeman Rawlings, who has stood by you and will continue to stand by you and we also support her to stand by you through thick and thin.”

Like President Akufo Addo, Nana Otuo Sereboe confessed that when he lost his mother he temporarily forgot he was a chief and wept like a baby. He recalled the former President sending the then Chairman of the Council of State, Alhaji Mumuni Bawumia, to mourn with him in New Juabeng. 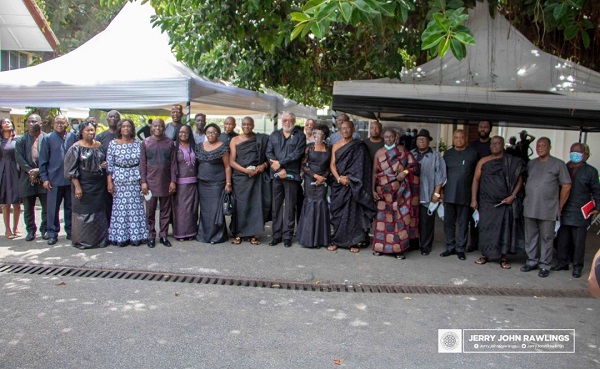 “That action really touched my heart, so it is probably ordained that I should also mourn with you in the position that I honourably occupy as Chairman of the Council of State. We want to assure you that we will be with you in all the activities marking Madam Agbotui’s funeral. Take heart as the Lord is with you and will always be with you,” the eminent traditional leader told President Rawlings and his family.

Diplomatic Corps
Also present on the same day to offer a message of sympathy was the Deputy Chief of Mission at the United States Embassy in Accra, Christopher Lamora.

Mr. Lamora told President Rawlings and his family that he was conveying the condolences of Ambassador Stephanie Sullivan, the government and people of the United States and the Embassy on the loss of Madam Agbotui.

“I do wish her safe passage, perfect peace and all of you, comfort. I learnt from a former Deputy Head of Mission that your mother showed a passion for taking care of the less fortunate. She left a lasting legacy,” Mr. Lamora said.

Members of the Diplomatic Corps led by its Dean, Colombian Ambassador to Ghana, Claudia Turbay Quintero, also called on the former President. Ambassador Quintero said the group visited to express their condolences, solidarity and warmth on the loss of Madam Agbotui.

They all took turns to express their condolences to former President Rawlings and his family.

Graphic Group
The Graphic Communications Group Limited led by its Managing Director, Ato Afful, in expressing their sympathies, pledged “our support to ensure a fitting send off for Madam Agbotui.”

Mr. Ato Afful who was accompanied by Editor of the Daily Graphic, Kobby Asmah, Franklin Sowah, Director of Marketing and Sales, Charles Amoako, Director Technical and Yvonne Aryee of Corporate Communications, said the Graphic Group “prays that Madam Agbotui finds consolation in the bosom of the Lord for giving this nation a proud son and a gallant leader, who has been instrumental in the history of this land for decades.”

The National Democratic Party, led by its General Secretary, Alhaji Mohammed Frimpong also called on the former President and his family to convey their sympathies.

Ambassador Dan Abodakpi, Stool Father of the Anlo State and Chairman of the Central Planning Committee of the funeral welcomed all the delegations and expressed the profound gratitude of the family to all for their show of solidarity and commiseration. He confirmed that the funeral of Madam Agbotui will take place at the forecourt of the State House on Saturday October 24 after which the body will be conveyed to Dzelukope for interment.