The National Identification Authority (NIA) has suspended the ongoing mass registration exercise in the Eastern region.

This follows an interlocutory injunction application filed at the High Court restraining the Authority from continuing with the registration exercise.

Until the determination of the application for an interlocutory injunction by the court, the registration exercise remains suspended, the NIA said in a memo to the staff on Friday (March 20, 2020).

The memo signed by the head of Corporate Affair of the NIA, ACI Francis Palmdeti said, “All staff are required to report for work and render proper accounting of registration equipment, materials and consumables in their custody to the Senior Registration Officers (SROs) with immediate effect”.

Two Ghanaian nationals, Mark Oliver Kevor and Emmanuel Akumatey Okrah on Thursday sued the NIA for not halting the Ghana Card registration exercise despite the government’s directive to stop public gatherings and as part of the novel coronavirus preventive measures.

They had also threatened to cite the Executive Secretary of the National Identification Authority (NIA), Professor Ken Attafuah, for contempt when the suit did not initially lead to a halting of the exercise.

President Akufo-Addo for social distancing to be observed as part of efforts to stop the spread of COVID-19.

The President also ordered the closure of schools and suspension of all conferences, funerals, religious events among others for that purpose.

In response to the criticisms, the NIA said given that it is observing the relevant protocols concerning social distancing, it does not find its decision to go ahead the registration as being against the directives of President Akufo-Addo.

Ghana has so far recorded 16 cases of the deadly COVID-19 as at Friday. 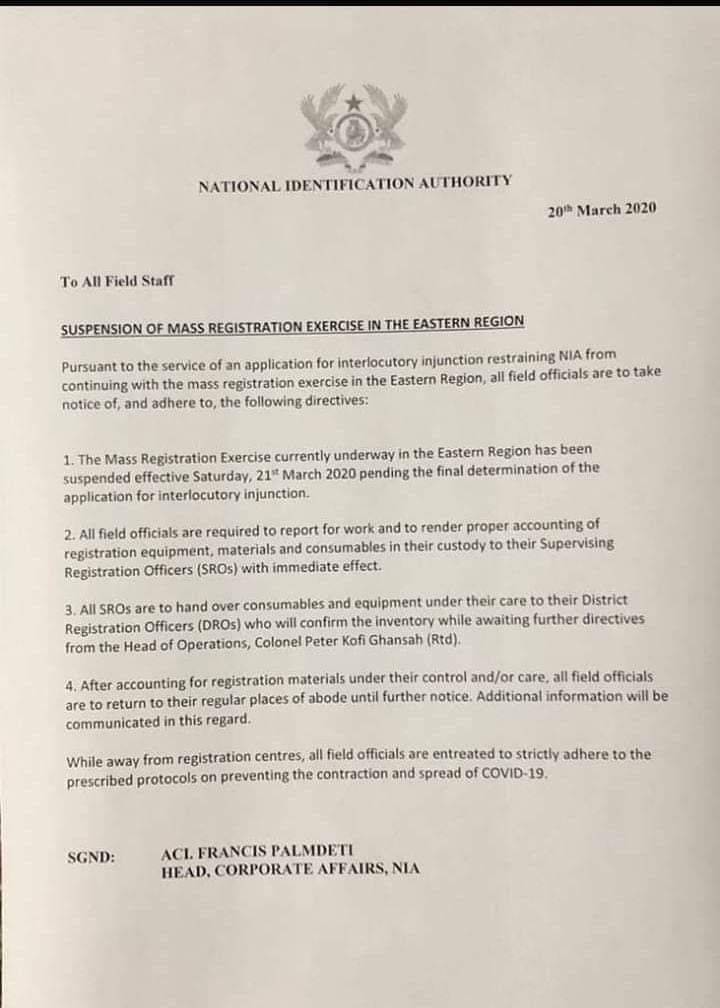