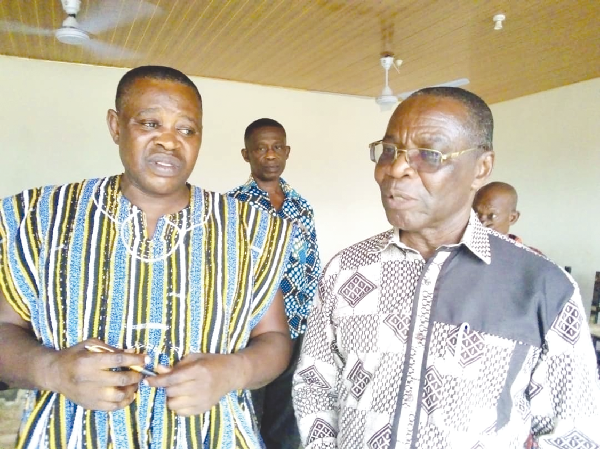 The Chief of Abesim, Barima Kyei Gyanpomadu Abrokwa II, has appealed to the district chief executive (DCE) for Atiwa West in the Eastern Region to ensure that Xtra Gold Mining Company covered its mining pits that were left uncovered after their operations.

Barima Abrokwa made the appeal when the DCE, Mr Seth Asante, visited the town to introduce himself to the chiefs and his people after his appointment as the political head of the area last Thursday.

The DCE, who was on a tour of chiefs’ palaces in the district to listen to their concerns as well as their priority areas for redress also visited Akyem Ampapatia and Akyem Banso.

Barima Abrokwa said although they had on several occasions requested Xtra Gold to immediately cover the mining pits, that was not done, thus posing danger to the people, especially children in the community.

According to him, the mining pits had been left uncovered for the past seven years and that had been a worry to them.

Barima Abrokwa indicated that they were not against the operations of the company since it had been licensed, but that they must do what was expected to avoid any calamity.

Xtra Gold, a Canadian Mining Company, has been operating in the area since 2006 and recently petitioned the government to investigate the circumstances that led to the destruction of its excavators by the Operation Halt II taskforce in a bid to stamp out illegal mining on the Pra River, even though they were a licensed company.

The chief explained that due to the dangerous nature of the uncovered mining pits, the aged as well as the young were afraid to go to their farms as there was the possibility of falling into the pits that had now become death traps.

Barima Abrokwa hinted that failure on the part of Xtra Gold to cover the mining pits would force them with no other option than to organise a massive demonstration against the company.

In response, Mr Asante stated that as the President's representative in the area, he would do the needful to ensure that the mining pits were covered to avoid people, especially children, falling into them.

He also called on the chiefs and his people to make available litigation-free lands for the construction of social amenities such as school buildings, health facilities and markets, among others, to improve the socio-economic well-being of the people.

At Ampapatia, the DCE called for the support of the chiefs and people of the area after Barima Owusu Akyem Boahen told him to rehabilitate their market as well as ensure that their street lights were functioning.

At Akyem Banso, the Chief, Barima Kwaku Kyei III, appealed to the DCE to see to the reconstruction of the bad road leading to his palace and ensure that the town’s street lights functioned well.

The chief also entreated Mr Asante to facilitate the completion of a police station in the town.

That, according to Barima Kyei, would make it possible for police personnel to be stationed there to fight crime.