Community anti-drug coalitions to be established 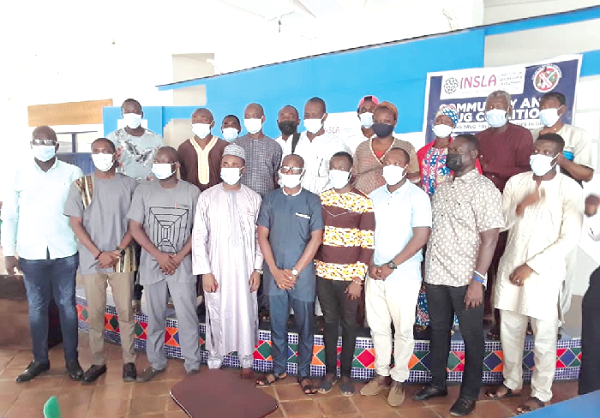 Mr Issah Ali (3rd from left), Programmes Advisor of the Institute of Leadership and Development, with the participants Follow @Graphicgh

In an effort to prevent and reduce illicit drug use, particularly among the youth, the Institute of Leadership and Development (INSLA), a civil society organisation, is facilitating the establishment of community anti-drug coalitions in the country.

For a start, 11 communities are being prepared to form the coalitions as voluntary groups.

The rest are Ablekuma Central, Sukura and Madina Tantana, all in the Greater Accra Region, and Yilo Krobo in the Eastern Region.

Members of the coalition will comprise representatives from the local government, business and health sectors, substance abuse organisations, the youth and parent-teacher associations (PTAs).

Others will be drawn from religious, civic and voluntary groups, the law enforcement agencies, relevant youth organisations and schools.

The coalitions are to collaborate with the Narcotics Control Commission (NACOC) to ensure the successful implementation of the programme.

The Programme Advisor of INSLA, Mr Issah Ali, announced this at a consultative meeting of community anti-drug coalitions for community leaders in Accra yesterday.

It was on the theme: “Building drug-free communities in Ghana".

Mr Ali said when constituted, the members would be trained in their expected roles and responsibilities, which would include ensuring that agencies and departments within their respective areas performed their assigned duties and mandate effectively.

He, however, said INSLA had no right to impose decisions on the coalitions, and that whatever they agreed to do would get the support of the institute, since the coalitions were voluntary groups.

He said the activities of the coalitions, when carried out successfully, would help address issues of mental health resulting from substance abuse in Ghana.

Mr Ali urged the participants to return to their respective communities and consult their chiefs, Members of Parliament, PTAs, assemblies and other stakeholders before setting up the coalitions.

The technical adviser to INSLA, Mr Luqman Usman, said the rise in substance abuse among the youth could be attributed to the increase in the global production of heroin and cocaine.

“In the current landscape, drug use is most prevalent among low-income groups," he added.

The officer said in recent times, cannabis had been used to prepare jollof and ‘shittor’ and beverages such as tea.

He mentioned the side effects of substance abuse to include stroke, heart attacks, bronchitis, loss of concentration, lung diseases, seizures and coma.

The Operations Officer of INSLA, Mr Abdul Rasheed Shaib, said drug prevention must be considered the most important matter of concern because "all of us belong to a community and we are at risk of being introduced to illicit drugs and substance abuse".