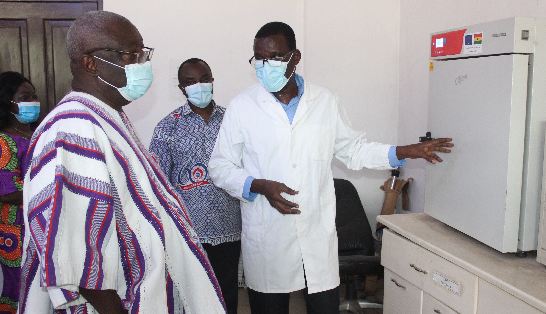 • Mr. Nelson Amey (right), Head of Analytical Sciences, CSIR, explaining the operation of an equipment to Dr Kwaku Afriyie (left), Minister in charge of the sector during the tour. Picture: Patrick Dickson

The Minister of Environment, Science, Technology and Innovation (MESTI), Dr. Kwaku Afriyie, has charged the Council for Scientific and Industrial Research (CSIR) to begin publicising and commercialising its research findings and innovations to enable the council to carry out its mandate effectively.

He observed that with the capacity to become a vibrant commercial entity, the culture of reticence which banned scientists from engaging in self-promotion on ethical grounds was inimical to the CSIR, insisting that it was time to give meaning to the idea of commercialisation.

Expressing disquiet over the relegation of the CSIR’s relevance and contribution to the development of Ghana, and particularly, in the agricultural sector, the minister revealed, for instance, that close to 90 per cent of Ghana’s maize varieties were from the laboratories of the institute but was it barely credited for same.

“It is not in the culture of scientists to be self-promoting but that has got its bad side. If somebody does not know who you are, you'll be a nobody. That is why I'm calling for us to assert ourselves. If we're marketing ourselves, I'll want a celebrity professor or celebrity research scientist appearing on various TV screens and platforms and promoting a product that is backed by science and data and not somebody's conjecture and I believe that Ghanaians will buy into it.

“When you take that path, CSIR will then become very relevant to the Ghanaian polity and most of the things that you request, your minister will not have any difficulty doing the advocacy for you,” he said.

Tour
Dr. Afriyie made the admonition when he went on a familiarisation tour of the Food Research Institute (FRI) and the Institute of Industrial Research (IIR) of the CSIR both in Accra.

The essence of his tour was to help him appreciate the operations, achievements and challenges of the facilities in a bid to help the council acquire a facelift.

He visited many laboratories and projects including IIR’s project demonstration site of a remotely controlled solar-powered irrigation system using a mobile device.

The minister noted that communication and information will for a long time remain the key to the fight against rural poverty, food insecurity and illiteracy in the 21st century.

“It is in line with this that I urge you to consider, in all your deliberations, the element of culture of media programming properly targeted at audience so that the maximum potential of the messages can be realised and not forgetting cultural norms and values of our society. I'm charging you to groom your own scientist celebrities who can engage the public at large,” he said.

Acknowledging the existence of laws and policies that may be a barrier to his call, the minister expressed his commitment to lead the review of such instruments to make it possible for CSIR to commercialise and make profits.

He said to give meaning to the software component of his ministry, which is innovation, the leadership of the CSIR needed to inundate him with proposals, adding that “I'll be your scientific lawyer and if there are laws to amend to make it possible, bring it to my attention.”

Dr. Afriyie, addressing some of the challenges of the facilities, observed that high electricity bills were a major threat to their operations and needed to be resolved with immediate effect.

He said instead of an expense, electricity should be treated as an input product and a public good.

He, therefore, charged the Director General of CSIR, Professor Victor K. Agyeman, to present a paper on the challenge for resolution because "if we do not take care, electricity bill alone will bring the institution down".

The minister said the government was taking steps to improve scientific research and infrastructure in line with its policy of championing development through technology.

“There is the need to embark on activities aimed at informing and influencing policy, using concrete evidence and demand from grass roots to call for effective implementation, increase public investment and improvement of accountability mechanism on post-harvest losses.

"The government is taking practical and deliberate steps to ensure that post-harvest management is effectively integrated in all its agricultural programmes such as Planting for Food and Jobs,” he added.

For his part, the acting Director of CSIR-FRI, Professor Charles Tortoe, averred that his outfit was heavily challenged in spite of its achievements and immense contributions.

He indicated, for instance, that inadequate consultancy and contract research jobs from government and private industries were affecting their internally generated funds, thereby limiting their operations.

“We receive very low financial support, we are plagued with very high electricity bill and we operate with inadequate and old processing equipment,” he said.

Professor Tortoe, therefore, appealed to the government for immediate and increased support.