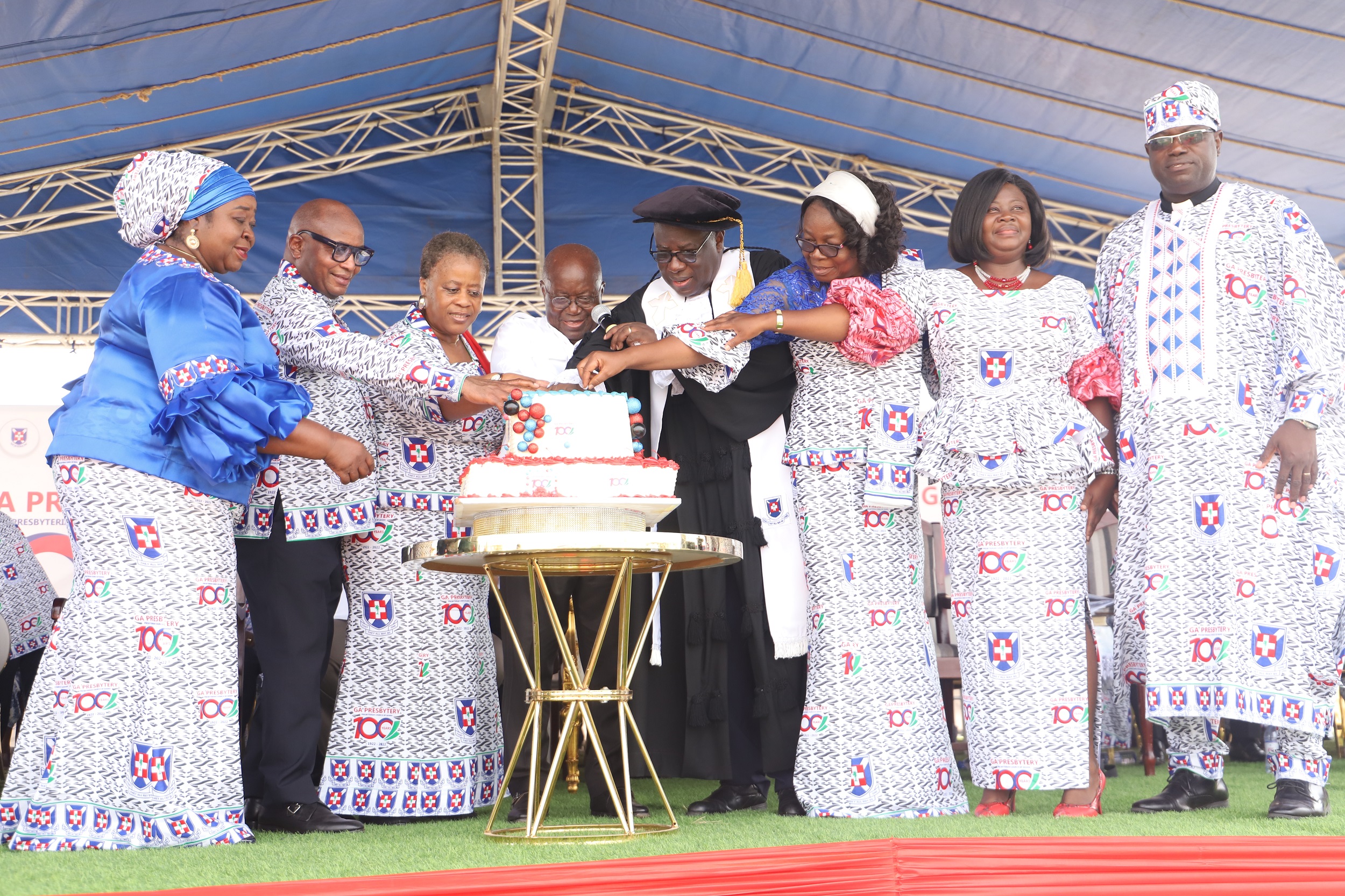 Members of the Ga Presbytery of the Presbyterian Church of Ghana (PCG) turned up in their numbers at the Black Stars Square on Sunday, December 18, 2022 to fellowship and give thanks to God in a thanksgiving service held to climax the 100th anniversary celebrations of the founding of the presbytery.

Displaying how the presbytery was nicknamed the ‘Rainbow Presbtery’ due to its diverse membership, worshippers, radiating in their anniversary cloth and in the dominant Presbyterian colours – white, blue and red, the congregation filled every space at the Black Star Square to join hearts and minds together to worship and celebrate God’s faithfulness and goodness.

It was a befitting climax to the year-long celebration which was themed: ‘Grateful for our heritage: Forging ahead in unity and faith,’ and attracted the entire leadership of the PCG led by the Moderator of the General Assembly, Rt Rev. Prof. Joseph Obiri Yaw Mante, some former Moderators of the Church, as well as representations from the other Presbyteries.

Also in attendance was the President, Nana Addo Dankwa Akufo-Addo who was the guest of honour. 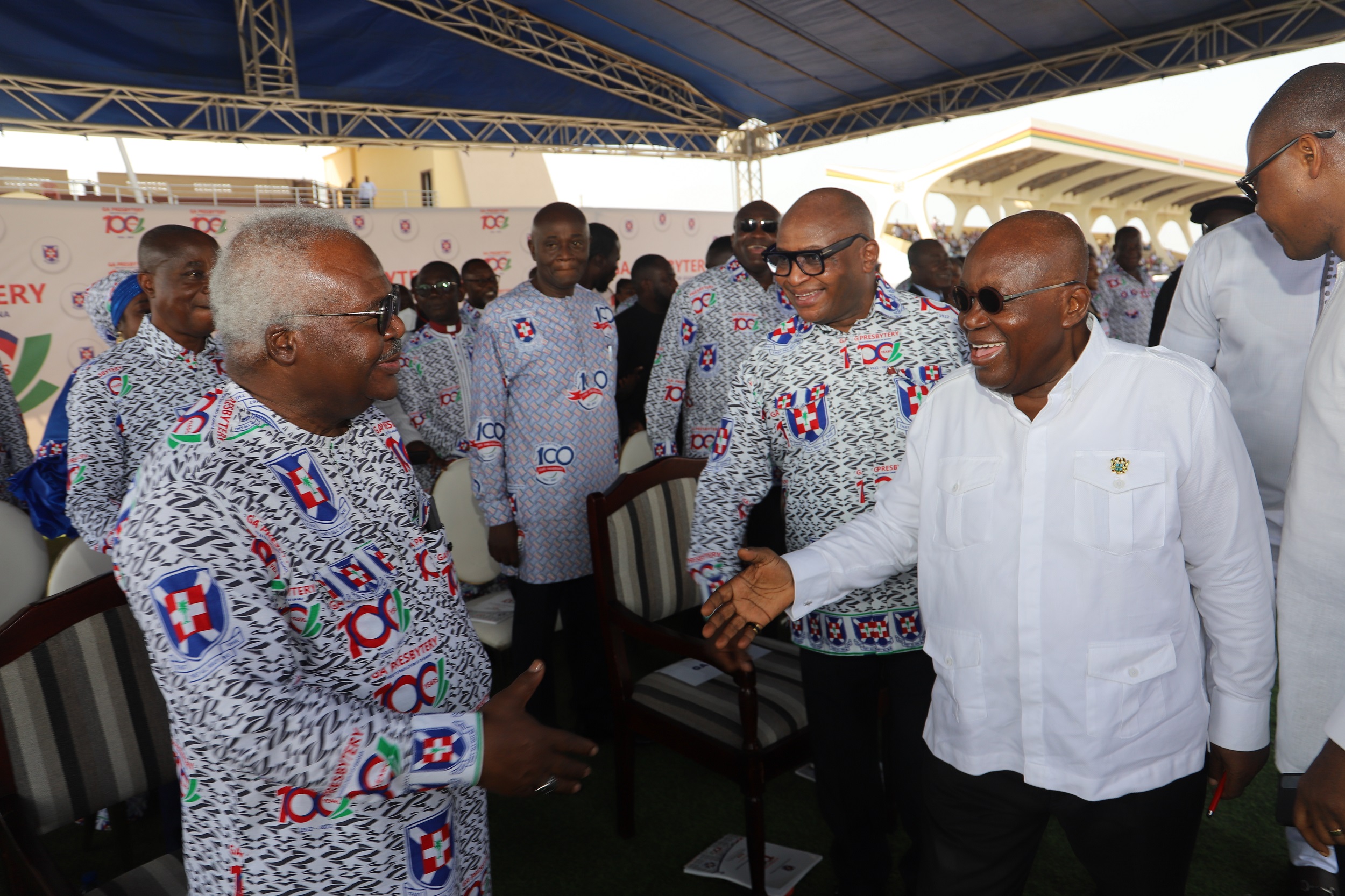 Though it was scheduled to start at 9:30, by 8am, almost every seat provided was occupied as worshippers arrived early to get a good seat either in the stands as well as the inner perimeter of the iconic square.

With a Presbytery Mass Choir which featured famed gospel star, DSP Kofi Sarpong, and a Presbytery Singing Band also in attendance, worshippers were put in the jubilant mood as they sang along and danced to the favourite Presbyterian hymns and songs.

President Akufo-Addo joined in cutting the centenary cake and also donated GHc100,000 to the church. 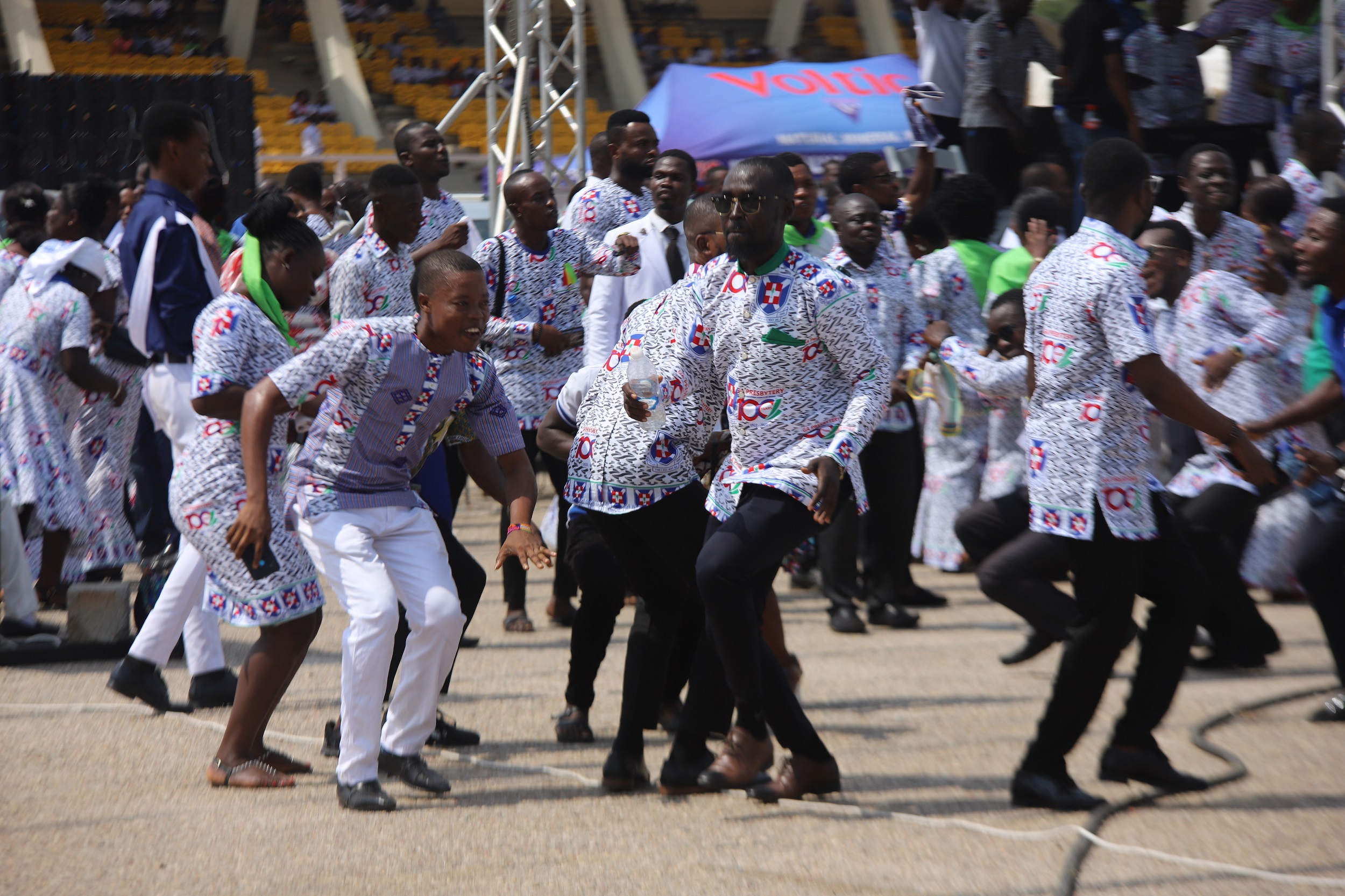 Tracing his roots to the PCG, as both his maternal and paternal grandparents played key roles in the formation and growth of the Presbyterian Church in Ghana, President Akufo-Addo said he was baptised Presbyterian and thus had a strong affinity to the church.

He described the theme for the centenary celebration as very appropriate, saying it reminded him of the difficult economic period and the reason Christians should hold on to their faith and never stop believing in the power and the grace of the Almighty God.

President Akufo-Addo said the word ‘Presbyterian’ always evoke certain images in the mind, such as strict disciplinarian, dislike of ostentation, hardworking, straight-talking, virtues of fortitude, temperance, prudence, justice and love for others, stressing those were also a reflection of the nation’s values.

He thus admonished members of the PCG to continue to instil these values to the new generation as that remain key in shaping the legacy of the nation. 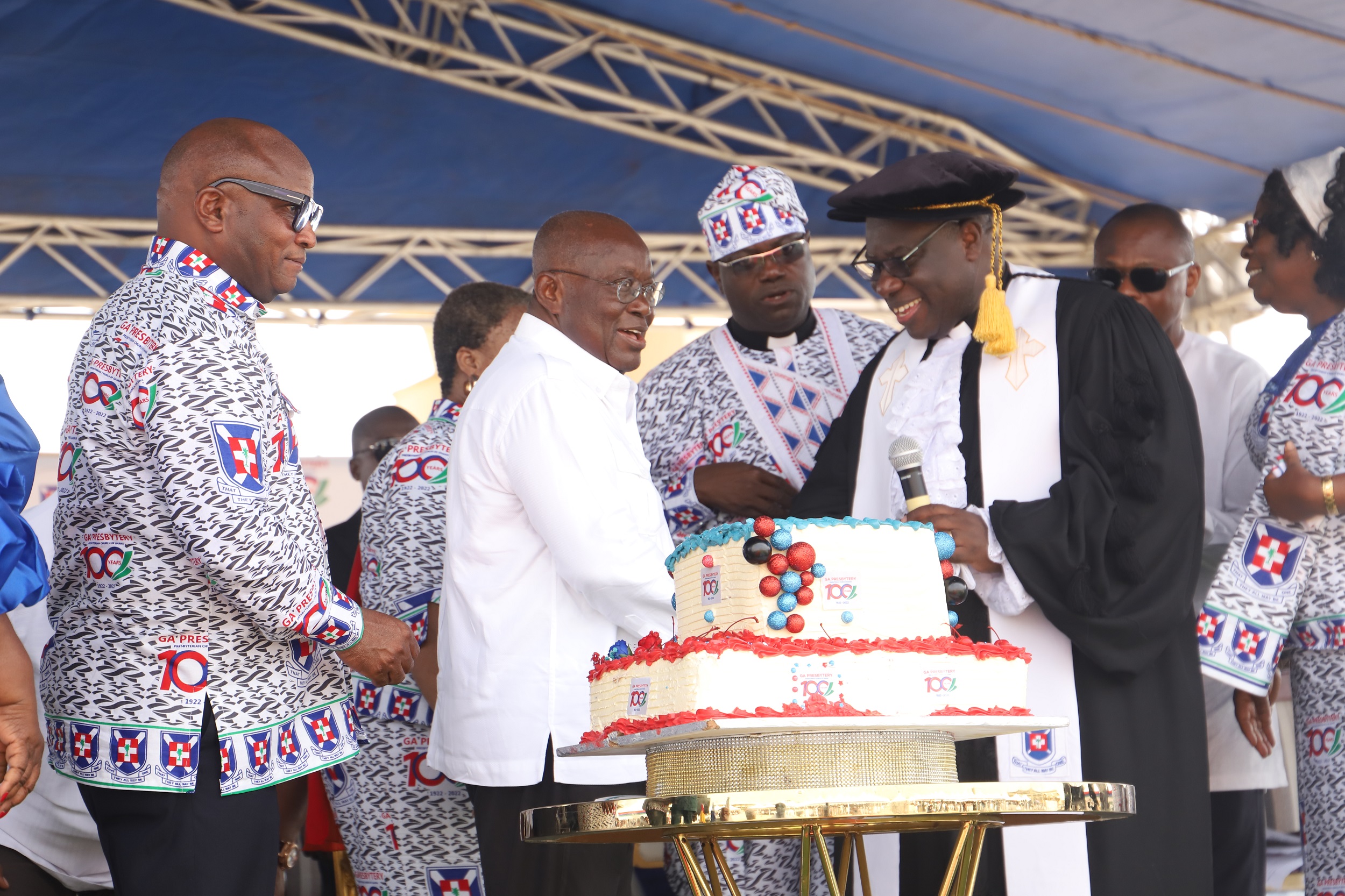 In his sermon, Rev Prof Mante urged Christians to demonstrate their faith in morality, and not just by professing that they were Christians.

He said one of the strongest exhibition of Christianity was to eschew corruption and greed in the country.

“Let us live holy lives by reducing corruption and greed in this country. Christianity should demonstrate itself in these practices,” he emphasized.

He also said that the Church should remain a place where God was worship in truth as well as in fellowship, saying it was a waste of time to be in church when congregants did not reconnect to God. The Church, the Moderator maintained, was built on spiritual, moral, social and environmental and therefore admonished:

Rev Prof Mantey further the Ga Presbytery to create a children and youth friendly atmosphere to meet the cosmopolitan needs of the Presbytery. 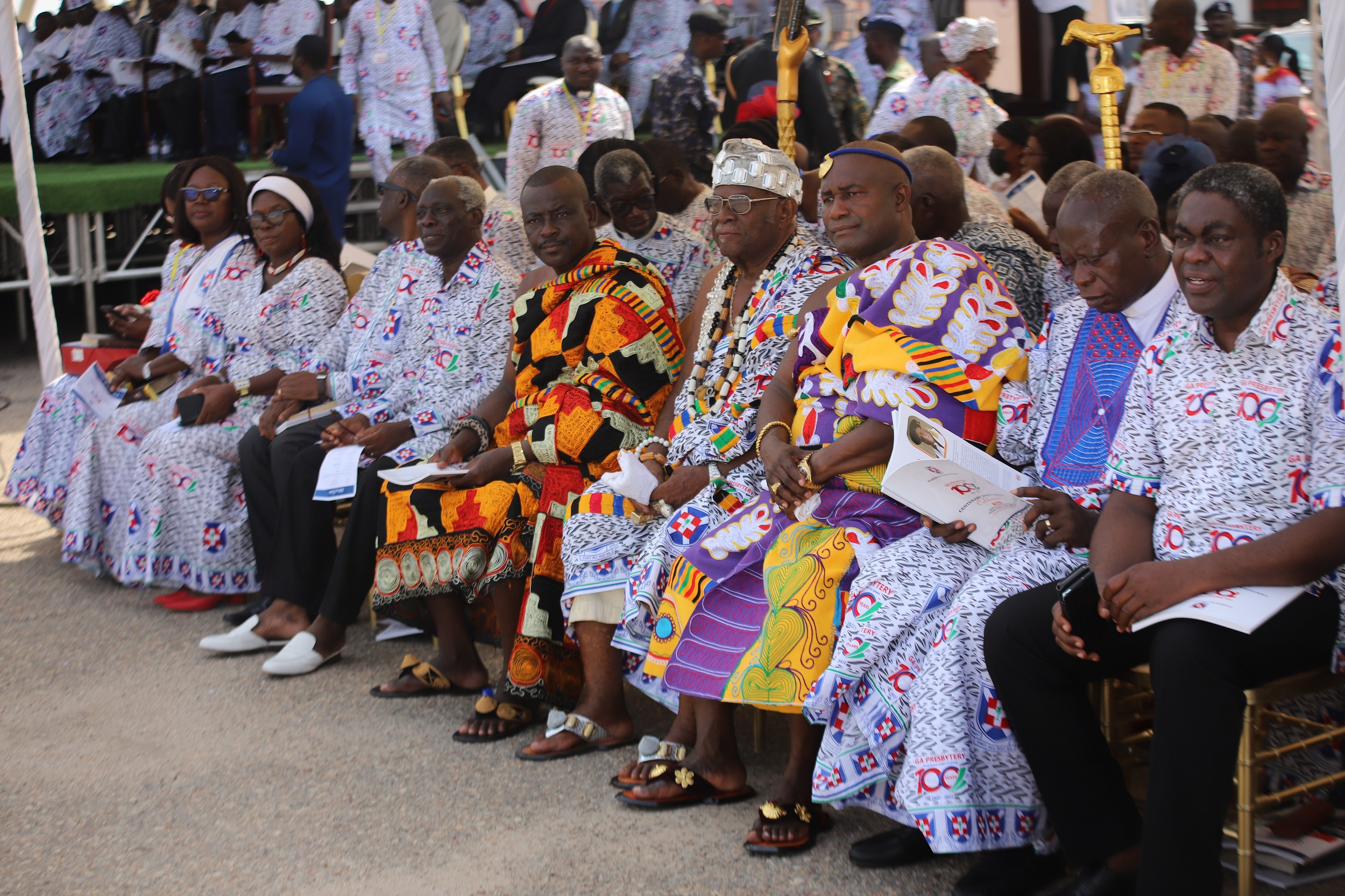 Activities held so far to mark the celebration include a heritage trail, where the youth were taken on a historical and cultural tour of some heritage sites of the PCG at the Osu Castle, Abokobi, Seseme and Akropong.