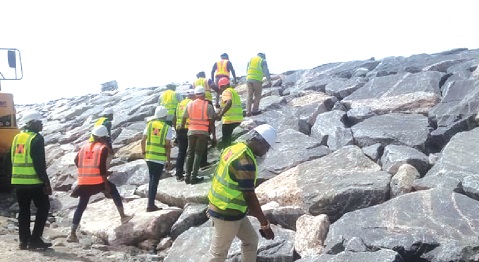 The Parliamentary Select Committee on Works and Housing has said Parliament will ensure that the 550-kilometre coastline has adequate defence against the sea to protect coastal communities.

After deliberations and communication with some affected communities, the Chairman of the committee, Isaac Kwame Asiamah, said the government might have to seek funding to undertake the rather expensive sea defence projects along the beaches.

"Lives are important and precious, and so whatever we need to spend to protect lives and property should be accepted. It’s expensive, but we need to invest," he stated.

Sea levels continue to rise and many coastal communities are suffering the effects.

Some coastal communities may be wiped off if critical steps are not taken to protect them.

He said while working on constructing the sea defence wall, it was important that activities such as sand winning were discontinued.

He commended Vuluxx, the construction company working in Cape Coast and Elmina, for the level of quality of the company’s work.

At Komenda, fishermen appealed that the work on the breakwater should be redesigned.

The Select Committee chairman charged contractors to have a re-look at the project in relation to the complaints and resolve them.

The Ranking Member of the committee, Vincent Oppong Asamoah, said while work done was commendable, it was worrying that contractors for most of the projects were hand-picked.

He indicated that such capital intensive projects could not be sole-sourced, saying the government must not downplay procurement procedures in such projects.

"Very quality work done, but we realise there were a lot of procurement procedure infractions, which is not good. You don't handpick contractors for such huge capital intensive projects," he stated, adding that the issue would be raised in their report to Parliament.