Christians must be bold against LGBTQI+ - Bishop Dr Okpoti 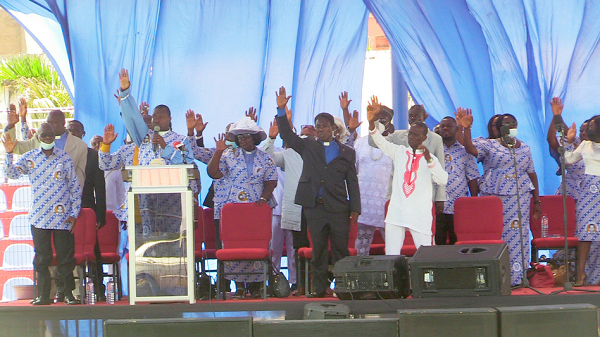 The General Secretary of the Holy Apostolic Reformed Church (HARC), Bishop Dr Thomas Okpoti, says it is shocking that some Christians are defending lesbian, gay, bisexual, transgender, queer, intersex, and asexual (LGBTQI+) acts in the country.

He said the Bible was unambiguous about its abhorrence of the practice and the end thereof, noting that it was wrong for people to call themselves Christians and yet support the act.

He said to ask the church to accept the act was like compelling the institution to accept all manner of sins as normal.

“I wonder the kind of Bible those who call themselves Christians, including the 18 legal, academic and civil society professionals, use.

LGBTQI+ is as sinful as any other act that the Bible hates, and the penalty for that is disastrous.

“The Church must take a strong stance instead of standing on the fence. I don’t know why it is difficult to just say no to this act. We must come to that place of rejecting politicians who want to buy our conscience,” he said.

Dr Okpoti was speaking at the 10th anniversary of the passing of the Founder of the church, Apostle Jacob Konney Okpoti, in Accra last Sunday.

He subsequently declared the stance of the church against the act and pledged support for the anti-LGBTQI+ Bill currently before Parliament.

The HARC is a pentecostal church in Ghana founded on March 3, 1983.

The late Apostle Okpoti carried a one-man crusade of preaching to people in rural communities through radio broadcasts on Obonu FM for many years.

He usually taught his listeners, mainly Gas, on their traditions and customs and how they should put the word of God ahead of everything.

He also assisted the underprivileged through scholarships and introduced other pro-poor programmes to help the needy in society.

It was for these reasons that his church members commemorated his passing and the legacies he stood for over the years.

The activities to mark his passing started about three months ago, and last Sunday’s service crowned the commemoration.

A documentary about his life and teachings as captured on compact disCs (CDs) were also made available to the members to learn from him.

In his sermon, Dr Okpoti, a televangelist and son of the late Apostle Okpoti, said there was the need for members of the church to forge ahead and put old things behind them.

While eulogising his father for what he stood for, Dr Okpoti said the time had come for members of the church to look at new ways of doing things to grow the church.

He took inspiration from Deuteronomy 1: 6-8 where the Bible states: “The Lord our God said to us at Horeb, ‘You have stayed long enough at this mountain’,” and charged the congregation not to concentrate much on their past.

“Everyone has a past because it is not bad to have that. But there is everything wrong with it if we continue to remain in the past. Let us resolve that on the celebration of the founder, it becomes a turning point and move away from this mountain.

“To the body of Christ, there is a place for us. We have to find a way to move from our past since we cannot remain there,” he stated.

Dr Okpoti challenged the church to desist from branding things they did not understand as demonic.

He prayed for the body of Christ, the church members, for prosperity, healing, wisdom and understanding for the leaders of the country.