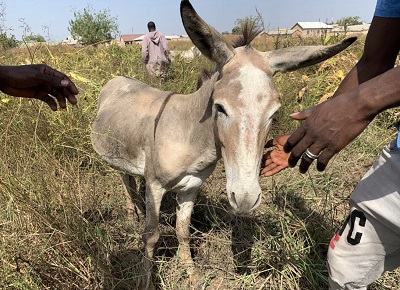 Power the donkey grazes in Walewale. His owner checks on him at least twice each day, fearing thieves that seek his lucrative hide. (Danielle Paquette/The Washington Post)

WALEWALE, Ghana — Night and day, he thinks of his donkeys. Are they still in the fields, munching on hay? Or has someone stolen them once again, wrecking his business for some foreigner's cash?

“My donkeys are my everything,” said Hardi Rafik, 25, a brickmaker who relies on animal muscle. “Now I must always guard them.”

To Rafik and others in Ghana’s rural north, donkeys have long provided the cheapest method of transport, dependably hauling goods from village to village. To Chinese merchants here, donkey hides — a key ingredient in traditional medicines — command big money abroad from producers of skin creams, fertility elixirs and energy drinks.

These competing demands have fueled a dramatic tug of war between people who call donkeys the economic heart of their households and vendors catering to China’s exploding market, with some animal rights groups urging the Ghanaian government to label the beasts as endangered.

Half of the world’s donkeys could disappear in the next five years if Chinese consumption of the gelatin boiled from their hides does not slow down, according to a November report from the Donkey Sanctuary, an animal charity in England.

Donkey populations in Ghana and Kenya, hot spots in this skin trade, are on track to be “devastated” in the near future, the researchers warned.

Beijing’s tightening relationship with African nations has wrought shiny new roads, schools and power plants in a stream of infrastructure deals. Less explored is the way Chinese influence is scrambling more basic ways of life, such as a family’s ability to fetch buckets of water in the countryside.

In the remote farming town of Walewale, people say hundreds of donkeys have vanished in recent years — or worse: Some animals have turned up skinned and left for dead.

Residents blame thieves motivated by a growing payday: The typical price of a donkey in the area has jumped from about $70 to $130.

Authorities in this West African nation outlawed the trade of donkey skins three years ago, but animal advocates say the problem persists because enforcement has been shaky.

At least nine donkey slaughterhouses legally operate in Ghana’s north. They are supposed to dispose of old or sick animals — the meat is sold at markets across the country — but owners often peddle the hides to Chinese buyers, managers told The Washington Post.

Those deals have unleashed ugly consequences. On top of animal thefts, young foals and pregnant mares are being led to their deaths to keep up with the demand, experts say.

Populations of the mammal have dropped by 37 per cent in Botswana, 28 per cent in Brazil and 53 per cent in Kyrgyzstan since 2007, the authors of the Donkey Sanctuary report estimated, delivering “a hugely damaging impact” to poor communities.

China’s donkey population, they noted, has plummeted 76 per cent over the past three decades. Similar data is lacking for Ghana, but experts say donkeys are being slaughtered at an alarming rate.

“If we don’t take care, the animal will go extinct,” said Awal Ahmed Kariyama, spokesman for RISE-Ghana, a nonprofit focused on rural issues.

Researchers who have studied the economic importance of donkeys in Nigeria and Ethiopia say the creatures are central to supporting rural life, largely because they are inexpensive and sturdy. Losing just one can be devastating.

Donkeys are known to rarely fall ill — which is why Chinese herbalists value their hides. They represent vitality.

Apiibolga Akasiede, who runs a slaughterhouse in a town about 50 miles northeast of Walewale, said his workers did not skin the animals until the Chinese demand emerged.

“The Chinese only want the skin,” Akasiede said. “We sell the skin to them and sell the meat to the market.”

Volume depends on the buyer’s needs, he said, but his business can kill up to 20 donkeys per day. The hides sell for roughly $28 apiece.

The operation is legal, he and other agents said, because the donkeys are purchased over the border from neighbouring Burkina Faso.

But activists and residents in northern Ghana say that kind of supply chain is loosely regulated. Hide sales, they say, bolster a black market that threatens livelihoods.

People in Walewale once let their animals roam the fields before roping them up or guiding them into a stable at nightfall.

Now paranoia clouds otherwise peaceful days, even after the slaughterhouse in town shuttered about a year ago. (Residents speculate that it ran out of donkeys, and the Walewale police declined to comment on the wave of thefts.)

Farmers and merchants ask neighbours to keep an eye on their animals while they venture out. They also take regular breaks to look after them — a grim new routine that dampens productivity.

“It spoils my work,” said Haruna Mohammed, 45, a rice grower who checks on his donkey at least twice a day after losing one three years ago.

Others could not afford to replace their animals.

Haruna Rahim, 24, harvested corn before his two donkeys went missing in 2017. Anger gripped his voice as he recounted searching for them and the horror when it dawned on him.

“I ended up with nothing,” said Rahim, who could not move his crops without them. Now he tries to find odd jobs.

Walewale was once full of donkeys — until “they stole all of them here,” said Rafik, the brickmaker.

He returned from town one day to find someone had skinned his animal. Rage stunned him.

He and his brother sold clay blocks from their backyard for four months before they could buy another.

These days, they share two. The donkeys grazed on a recent afternoon in the tall grass — tawny figures in a sea of green.

Rafik placed his hand on a furry head.

He gave them names that invoke energy and strength, he said, because they carry the materials that build his community.

The merchant keeps them in a stable by his house. When he wakes at night, he waits to hear the familiar braying. Then he can drift back to sleep.