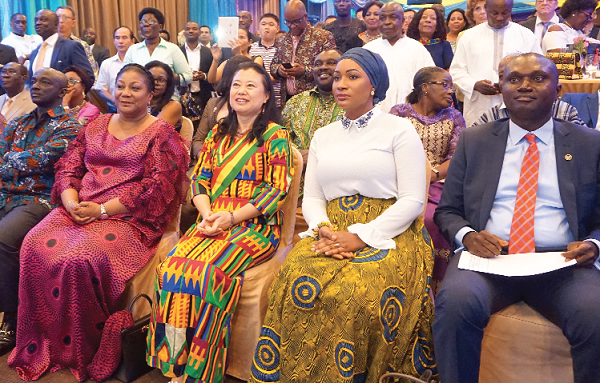 Madam Sun Baohon, (in Kente cloth), flanked by Mrs Rebecca Akufo-Addo on her right and Mrs Samira Bawumia on her left. Follow @Graphicgh

The Chinese Ambassador to Ghana, Madam Sun Baohong, has said that China-Ghana cooperation will not only benefit the two countries and people but will also make important contribution to the peace and development of Africa.

Speaking at a farewell reception in her honour in Accra last Tuesday evening, the Ambassador said she was confident that China-Ghana relations had brighter prospects.

Madam Baohong, who began her duty in Ghana as the 14th Chinese Ambassador on March 27, 2014, disclosed that a number of new major projects were being implemented or about to kick off.

She mentioned those projects as the expansion of the Tema Port, the Cocoa Processing Factory, the on-shore oil exploration in the Volta Basin, Jamestown Fishing Port Complex and the phase II of the University of Health and Allied Sciences in Ho.

The outgoing ambassador noted that China supported the “One-District, One-Factory,” “One-Village, One-Dam” and “Planting for Food and Jobs” initiatives of the Ghana government, and encouraged more Chinese enterprises to invest in Ghana’s energy, resources development, agriculture and infrastructure.

Over the past four years, Madam Baohong said she had witnessed the smooth development of China-Ghana relations, adding that the two countries had maintained close high-level exchanges.

She said Vice-President Mahamudu Bawumia, the First Lady, Mrs Rebecca Akufo-Addo, and a number of Ghanaian ministers had visited China.

The ambassador said over the past four years, China remained the largest trading partner and main source of investment for Ghana.

She announced that bilateral trade volume had risen from 5.6 billion US$ in 2014 to US$6.68 billion in 2017 with Ghana’s export to China reaching a historical high of US$1.85 billion.

China’s registered investment projects in Ghana, she noted, had risen from 691 in 2014 to 790 by the end of 2017, covering manufacturing, mining, energy, agriculture and the service industry.

Members of the diplomatic corps were there in their numbers, as well as traditional, religious leaders and other dignitaries who had graced the occasion.

Order of the Star of Ghana

Earlier, President Nana Addo Dankwa Akufo-Addo conferred the State Honour of Member of the Order of the Star of Ghana (Honorary Division) on Madam Baohong for working to ensure tremendous achievements between the two countries during her tenure of office in the country, reports Victor Kwawukume.

President Akufo-Addo described her as someone whose tour of duty of Ghana had witnessed a significant and tremendous expansion of cooperation and friendship between China and Ghana.

Part of a citation accompanying the award which was read by the Foreign Affairs Minister, said: “In recognition of your outstanding contribution to the socio-economic development of Ghana, your calm disposition as a distinguished diplomat which has helped enhance mutual understanding and cooperation between the people of Ghana and China, the Republic of Ghana confers on you, Sun Baohong, the State Honour of the Republic of Ghana, Member of the Order of the Star of Ghana, Honorary Division.”