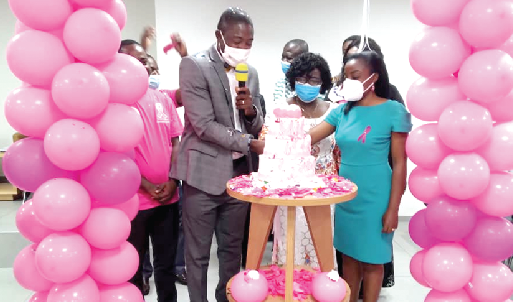 Dr. Okoe Boye and other officials of the ministry cutting a cake to signify the start of the campaign
30.5k Shares

The Ministry of Health (MoH) has, for the first time, launched a national campaign to raise awareness of breast cancer.

It said the initiative was to help coordinate and synchronise all the efforts stakeholders were making with various awareness programmes on breast cancer to give the campaign on the disease a national character.

Speaking at the launch of the national campaign in Accra yesterday, a Deputy Minister of Health, Dr. Bernard Okoe Boye, said the programme was being launched intentionally close to the end of the Breast Cancer Awareness Month, which is every October, to signal the intention to make the awareness of breast cancer a year-long affair.

He said the initiative was also to strengthen the national pursuit to significantly cut down on mortalities and complications arising from breast cancer.

Dr. Okoe Boye said in line with the national agenda to deliver Universal Health Coverage (UHC), the government was committed to ensuring that all citizens had access to quality health care, regardless of one’s location or socio-economic status.

He indicated that UHC would help reduce breast cancer prevalence and mortality rate because people would have access to clinical breast examination in order for potential cases to be picked up early for treatment.

“The UHC will also ensure that persons affected by the disease receive adequate care. The government is also improving care for breast cancer patients by putting treatment for the disease on cases covered under the National Health Insurance Scheme (NHIS),” he added.

Dr. Okoe Boye said other national interventions on the disease included the employment of a significantly high number of nurses to improve on the country’s nurse-patient ratio.

He commended healthcare professionals for giving attention to other medical conditions, such as breast cancer, even in the midst of the national fight against the COVID-19 pandemic.

He further expressed gratitude to all stakeholders who had, over the years, been involved in creating awareness of breast cancer.

An oncology specialist at the MoH, Dr. Baffour Awuah, who is also a Special Advisor to the Minister of Health, said breast cancer was not preventable but treatable when it was detected at an early stage.

He expressed worry over the fact that many people were diagnosed of the disease at a late stage when treatment was no longer an option.

He appealed to all women, therefore, to take clinical breast examinations seriously and go for checks at least every month, since 96 per cent of the national breast cancer burden was among women.

Dr. Awuah called on men to also support the national fight against breast cancer and encourage the women in their lives and other women to take breast screening seriously.

He also encouraged men to screen their breasts too, since they constituted four per cent of the national burden on breast cancer.

He urged the public not to believe the myth that breast cancer was a spiritual disease and rather see the disease as a serious health condition.

He appealed to health institutions to focus on examining breasts with their fingers, instead of the use of the mammogram, considering that majority of the people affected were below 40 years.

Dr. Awuah also appealed to antenatal clinics to examine the breasts of all patrons at their facilities as part of the fight against breast cancer.

He assured the public that the MoH was going to decentralise clinical breast care services and would deploy professionals from the capital to deprived communities every month through the monthly breast cancer campaign.

He said that had become necessary because system failure had been identified as a reason for breast cancer complications.

Other stakeholders on breast cancer, such as the Ghana Health Service and the Breast Surgery Unit at the Korle Bu Teaching Hospital, pledged to support and commit to making the initiative a success.