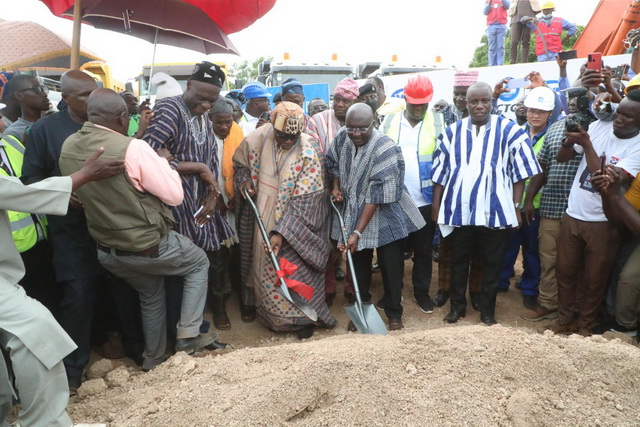 Vice President Dr. Mahamudu Bawumia on Monday, June 13, 2022 cut the sod for the construction of a 167-kilometre highway from Tamale through Yendi to Tatale in the Northern Region.

The massive highway, which has significant portions of it untarred for decades under successive governments, forms part of the Eastern Corridor road linking major towns in the Northern, North East, Upper East, Oti, Volta and Greater Accra Regions.

The $150m project, which will include the provision of socio-economic complementary interventions in the form of schools, boreholes, and clinics within the project communities (Tamale, Mion, Yendi, Zabzugu & Tatale), has been broken into two lots; with Lot One being the 61.98km Tatale-Yendi road and Lot 2 the 106km Yendi-Tamale road.

Speaking at the ceremony, Vice President Bawumia described the sod cutting for commencement of work as "historic", and a demonstration of President Akufo-Addo’s inclusive development vision for all, especially the North.

"We are here to witness the historic sod-cutting for the construction of the Tatale-Yendi-Tamale road which forms part of the Eastern Corridor roads which links Tema, Asikuma, Hohoe, Bimbilla, Yendi, Gushegu, Gbintiri, Bunkprugu, Garu, Bawku and Polimakom,' Dr. Bawumia said.

"Today’s ceremony is of great significance to us since it promotes the Government’s drive to ensure inclusive and balanced development in Northern Ghana - an area that was identified in the 2014 Household Survey as one of the poorest parts of the country," he added.

"In the history of our country since independence, no government has attempted to tar this road and today's sod cutting is a dream come true." 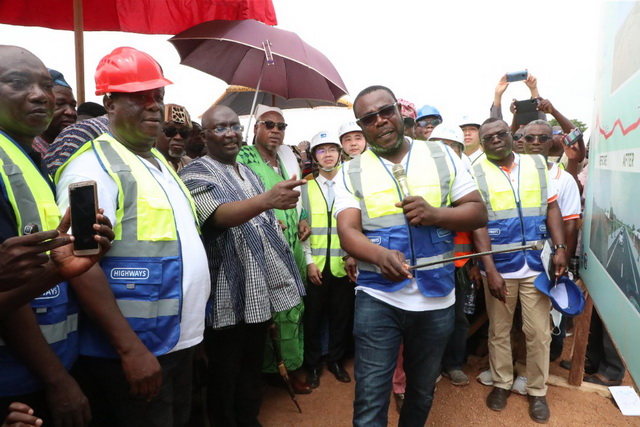 The Tamale-Yendi-Tatale Road Project, is being fully funded with a USD 150 million World Bank facility under the Transport Sector Improvement Project (TSIP).

In addition to undertaking the 167km Highway between Tatale and Tamale, an additional 670km and 240 km of feeder roads will be rehabilitated in the Upper West and Bono regions respectively as part of this facility.

"It means under this Transport Sector Improvement Project, 1,077km of roads will be rehabilitated within the next two years. The trunk road component will be paved, whilst the feeder roads will be mainly gravel finish," Dr. Bawumia revealed.

The Vice President noted further that the Transport Sector Improvement Project has been developed to support the development of road infrastructure, improve road safety and strengthen the capacity of sector agencies.

NPP's unmatched record in road development
Reiterating the Akufo-Addo government's commitment to develop more roads in the country to ease travels, Dr. Bawumia said the Akufo-Addo government's record in road construction in the past five years cannot be matched by any government in the 4th Republic, citing the construction and rehabilitation of major road networks in the country to buttress his claim.

"Ladies and Gentlemen, the Government of President Nana Addo Dankwa Akufo-Addo, is undertaking various road development projects throughout the country. As we all know, roads are the arteries through which development flows," said the Vice President.

"For example: On the Tema-Akosombo stretch, M/S Inzag from Germany is working on the dualization between Tema and Asutsuare and constructing two interchanges - one at Ashaiman Roundabout and the other at Asutsuare; the Asikuma-Junction and Have stretch is being done by First Sky; the Have-Hohoe stretch is under construction by Green House; Hohoe-Jasikan stretch is by Rollider; Jasikan-Dodi-Pepesu - Sino Hydro has completed the stretch; Nkwanta-Oti-Damonko stretch-by M/S China Jianxi; Kpassa-Oti-Damonko stretch-by M/S First Sky; and Oti-Damonko-Bimbilla-Yendi-Gushegu stretch is also ongoing."

Dr. Bawumia assured that President Akufo-Addo’s second declaration of 2022 as another year of roads will continue unabated because "good road networks are essential in linking producers to markets, workers to jobs, students to schools, and the sick to hospitals. Undoubtedly, roads are vital to any development plan."