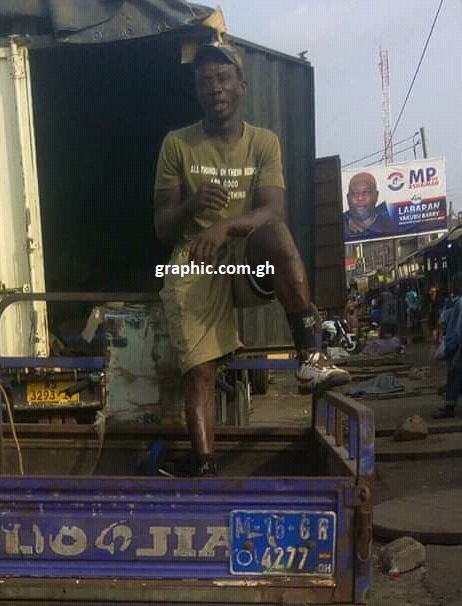 A relative of Mr Eric Ofotsu, the 28-year-old man who was allegedly shot in Ashaiman on Sunday, April 5, 2020, by a soldier has disputed the claims made by the Ghana Armed Forces to the effect that the deceased engaged the solider in a scuffle, during which the soldier’s riffle went off accidentally.

Ms. Ofosua McCarthy, a sister of the deceased who witnessed the incident at Taaboline near the Ashaiman main market refuted the military’s assertion that his deceased brother attempted to disarm a soldier who was enforcing the COVID-19 restrictions on movement

Speaking to the Daily Graphic on Monday, April 6, 2020 at the scene of the incident, Ms MaCarthy said from what she saw, she suspects his brother was shot intentionally by the soldier.

She said around 3:30 pm on Sunday, she was descending from a storey building where she had laid a mat near the spot where the shooting occurred, when the soldier arrived.

She said when the soldier saw her, she asked here where she was going to which she responded she was visiting the washroom nearby.

Ms McCarthy said the soldier allegedly marched her to the washroom and stood there while she urinated and later marched her back to the spot she was taking her nap.

She said while the soldier was descending, he saw the deceased approaching and ordered him to go home but the deceased told him, he had no place to go since he sleeps in the market.

Ms McCarthy said although she intervened by telling the solider that his brother had a mental challenge, the soldier would not barge but kept issuing orders.

“Other people near the scene intervened and told the soldier not to engage the deceased since he was known to be mentally unstable, but he would not listen to us.”  She said

The eyewitness said at some point of the confrontation, the solider received a phone call and moved towards the military vehicle which was stationed in the market.

She said the soldier later returned to the scene with his rifle, pointed it at the deceased and shot him in his neck.

“The bullet went through the neck and came out at the back. The soldier then picked the spent shell with a tissue paper and placed in a polythene bag and later said “I am sorry” as he walked away”

A landlord at Taaboline, Mr Kweku Tormesti corroborated the narration of the Ms McCarthy and challenged the Ghana Armed Forces to conduct an independent probe into the matter.

He said if the deceased was carrying narcotic as alleged by the Ghana Armed Forces in their statement, the best way out was not for the soldier to shoot him and accused the soldier exhibiting high handedness on an innocent citizen.

The Assembly Man for the Naa Amui Electoral Area, Mr Sharack Tetteh said at about 4pm, he received a call that a young man has been gunned down by a military man.

He said he picked his ID card and moved to the scene to verify the incident.

Mr Tetteh said he was however not enthused by the statement issued by the G.A.F stressing that in spite of the admonition by neighbours that the young man had mental problem, the soldier went ahead and did what he did.

“If you do not have facts, they shouldn’t be speaking to the issues. Do not sit in the comfort of your office and make allegations which is not back by facts.” He said

He called for an independent enquiry into the matter as well as justice for the deceased.

When the Daily Graphic visited the scene on Monday, personnel from Defense Intelligence and Military Police were spotted conducting interviews while military helicopter hovered in the skies.

The Police and the Military had also increased their patrols in the municipality especially around the Ashaiman Main market.