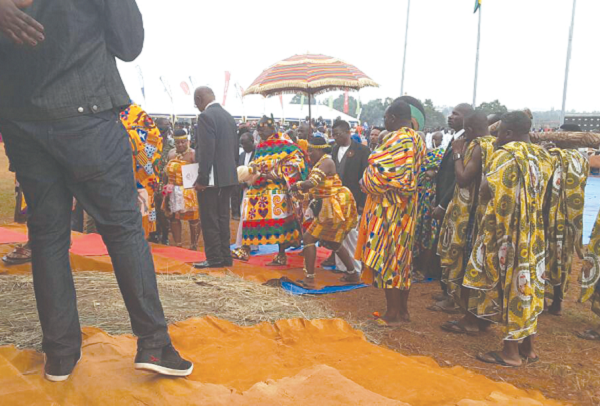 The Asantehene, Otumfuo Osei Tutu II, has called on traditional leaders in Africa to look beyond "our kingdoms" and make the most out of the traditional institutions and leadership in the governance of their nations.

He said the value of traditional governance was not lost and that the need for a more positive role by traditional leaders in the economic and social development agenda of their nations was beyond controversy.

Speaking at a grand durbar to mark the 25th coronation anniversary of the Buganda King, Kabaka Ronald Muwenda Mutebi II, in Kampala yesterday, the Asantehene stated that a blend of traditional governance and that of the nation had enormous benefits for the people.

The Buganda kingdom had existed for more than 1000 years but it suffered a major political attack during the administration of Ugandan Prime Minister, Milton Obote, which led to the Kingdom being abolished in 1969 .

However, in 1993, the curernt President, Yoweri Museveni , restored the Kingship with the coronation of Ronald Muwenda Mutebi II as the new Kabaka.

The Buganda kingdom, which is recognised by the Ugandan Constitution, runs its own government and parliament independent of the central government.

Otumfuo Osei Tutu, who was the Guest of Honour for the event, arrived at the grounds dressed in rich kente ,adorned with gold ornaments accompanied by throbbing of kete drums and the ntahera horns.

Apart from the appearance of the Asantehene, which caught the attention of the large gathering, his speech also drew occasional applause from the crowd .

Otumfuo Osei Tutu said African traditions needed to forge a collaboration between the past and present to ensure that the traditions did not manifest in only music and dance but in the pockets of the people.

"Towards this end, traditional rulers accross the continent must face some stark challenges; the first challenge is to dispel the notion that ethnic loyalties promote conflicts and undermine unity and stability.

"The second challenge is to redirect the unbroken spirit of our people towards a new battle for economic development," he said.

He noted that “the challenge our forefathers faced obliged them to wage wars to defend and protect their integrity and identity. Today, that obligation is non-existent, neither are there human enemies to fight.”

"Regardless of language differences, we are one people sharing the same values and aspirations.

The only enemies we all have to fight are poverty, ignorance and diseases and the only weapon we need to fight these enemies is education, the Asantehene stressed.

He commended Kabaka Mutebi II for his sterling leadership that had brought progress to his Kingdom.

In his speech, Kabaka Mutebi commended the Asantehene for honouring the Kingdom with his presence, and pledged to work to strengthen the relationship between Buganda and Asante .

The Buganda Katikkiro (Prime Minister) , Mr Charles Peter Mayiga, said a number of initiatives in education, health, poverty reduction and industrial development had been initiated over the past 25 years to better the lives of the people of the Kingdom.