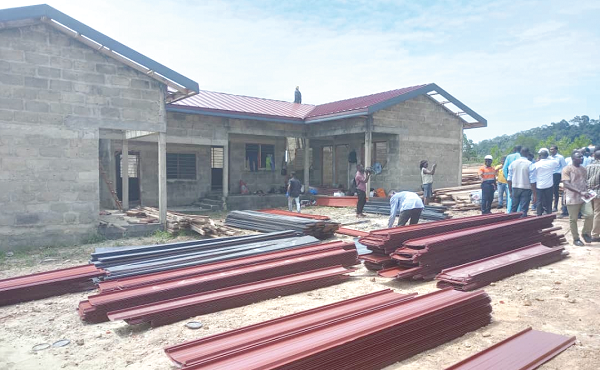 The Appiatse Reconstruction Implementation Team has intensified efforts to get the Future Global Resources (FGR) Prestea Mines' resettlement site at Odumase ready for occupation by displaced residents of Appiatse in the next two weeks.

Currently, 31 housing units, making up 110 rooms, are being roofed with iron sheets in preparation to meet the May 1, 2022 deadline for resettling the residents.
Additionally, the fixing of doors and windows will begin next week.

During a working visit by a Deputy Minister of Lands and Natural Resources, Benito Owusu-Bio, to the site, the Daily Graphic observed that about a dozen carpenters were busily working to roof the buildings.

Bundles of iron sheets and piles of wood had been conveyed to the site for work to continue in earnest.

Mr Owusu-Bio, who is the Chairman of the Appiatse Reconstruction Committee, assured the residents that the temporary facility would be ready for use by May 1, this year.

The residents of Appiatse were displaced following the January 20 explosion that claimed 13 lives and ravaged the entire settlement.

The displaced residents of the area are currently putting up in tents.

A downpour last week ripped off some of the tents, and it took the Prestea-Huni Valley Municipal Assembly, the National Disaster Management Organisation (NADMO) and the Appiatse Reconstruction Implementation Team to fix the tents.

With the rains expected to peak in subsequent months, expedition of work is required to make the FGR facility habitable for the people.

Mr Owusu-Bio expressed satisfaction with the work that had been done so far and urged the workers to put in their best to complete outstanding work before the May 1 deadline.

He interacted with the displaced residents and assured them that they would be moved into the temporary FGR structures on May 1, as promised.

"President Nana Addo Dankwa Akufo-Addo will address workers of Ghana on May 1 and we want you to celebrate that day in the new FGR facilities," he said.

For his part, the Municipal Chief Executive (MCE) for Prestea-Huni Valley, Dr Isaac Dasmani, said all materials needed for the speedy completion of the work had been provided.

He said the roofing of the 31 structures would be completed in a couple of days to pave the way for the fixing of windows and doors to begin next week.

Dr Dasmani said the tents that were ripped off during the downpour last week had been restored.

He urged the residents to exercise restraint while efforts were made to finish work on the temporary FGR facilities.