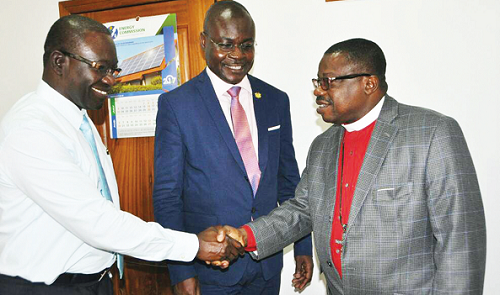 The Anglican Church is partnering the Ghana Standards Authority (GSA)and the Food and Drugs Authority (FDA) to fight the proliferation of fake drugs and other counterfeit goods on the Ghanaian market.

The Anglican Bishop of Accra, Rt Rev.Dr Daniel S. M. Torto, who disclosed this,explained that the church had chalked up some successes in the campaign which it started last year, but said there was more to be done.

“We are here to see how best we can help the GSA to mount the campaign against the proliferation of fake drugs into the country,” he said.

Rt Rev. Torto said this when he led a three-man delegation to the GSA to pay a courtesy call on the Chief Executive Officer (CEO) Prof. Alex Dodoo, to seek partnership with the authority to fight against some social vices.

He said the church’s partnership with the GSA and the FDA was part of its social protection programmes.

Rt Rev. Torto said the visit was also to congratulate the CEO, who is a member of the Anglican Church.

He later prayed for God to strengthen Prof.Dodoo and grant him the wisdom and direction to effectively lead the workers to achieve the aim and vision of the institution.

For his part, Prof.Dodoo expressed gratitude to the bishop and the delegation and said it was encouraging for the church to come forward to partner with the GSA and the FDA to ensure that Ghanaians “get what they pay for.”

He said the GSA, in collaboration with the FDA, would work with groups the church was training to fight the fake drugs menace.

Prof. Dodoo said besides fake drugs, the authority was also working to ensure consumer safety which he said should not be short-changed.

He said currently there were a number of items on the Ghanaian market that were substandard and those included building materials, electrical wires, weighing machines and measuring containers, as well as plastic containers.

The authority, he said, was sampling the market for testing.