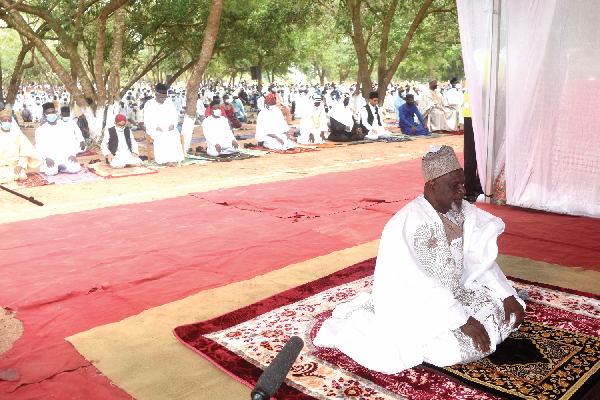 The Ahmadiyya Muslim Mission in Ghana has called on Muslim leaders  to lead the way in supporting the development of the country.

The mission said that would help provide alternative ways of helping to solve the myriad of challenges facing the country.

Addressing Ahmadis at their convention centre at Ashongman in Accra yesterday after the Eid-ul-Adha prayers, the Ameer and Missionary in charge of the Ahmadiyya Muslim Mission in Ghana, Alhaji Maulvi Mohammed Bin Salih, therefore, charged  Muslims to contribute  their quota to help their leaders in discharging their mandate.

“Our individual contribution can turn the fortunes of this country around and this is the basic tool needed to ensure a development-oriented society that benefits all,” he said.

He noted that developing the country was not limited to any political party or government but one that should be championed by everyone.

“It is our collective duty, if we fail no one party fails but we fail as a country and we should not know failure, which should not be in our dictionary, so for a progressive nation building, all hands must be on deck,” he said.

The morning prayers took place at the Ahmadiyya Muslim Conference Centre at Ashongman with hundreds of Muslims attending.

Veronica bucket and nose masks were shared in compliance of COVID-19 protocol.

The prayer and the sermon lasted for two hours after which the Muslims dispersed to their various homes.

The Ameer and Missionary in charge of the Mission expressed displeasure about the rate at which social responsibilities were being ignored with impunity without holding anyone accountable.

“Instead of addressing our social responsibility we are now involved in selfish individualism that is baptised with naked daylight corruption with the speed of lightening.”

Alhaji Salih explained that Eid-ul-Adha was not only a means of moral and spiritual uplift  but a reminder of the need to sacrifice for nation building and personal development.

He charged them to consider the slaughtering of animals as sacrifice as a religious and moral pledge from their inner selves and a testimony of their preparedness to sacrifice the animals so as to serve as a cleansing process.

Alhaji Salih said Prophet Abraham did not only make sacrifices but prayed for peace in return and urged Muslims to make peace an intrinsic part of their daily lives.

“We who are Muslims need to appreciate the fact that it is because of the importance of peace and the meaningful role it plays in the lives of mankind that Allah has himself named our religion, Islam, which is peace,” he said.