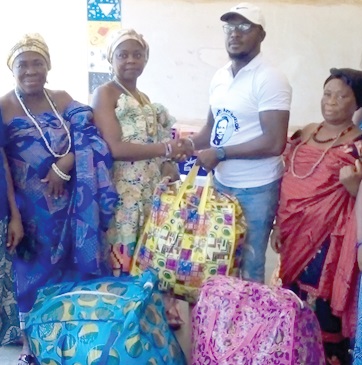 The Elizabeth Ambasaki Foundation, a Non-Governmental Organisation (NGO) in the Lower Manya Krobo Municipality, has presented various items including clothing, shoes, sandals, food items and drinks to the Nectar Foundation at Nuaso and the aged at Odumase-Krobo both in the municipality.

The Elizabeth Ambasaki Foundation with “Make a difference” as its mantra, was founded last year by the children of the late Elizabeth Ambasaki to remember and continue her good deeds that touched the lives of many people, especially orphans and the vulnerable in the Manya Krobo society when she was alive.

The two donations, which were done by Sampson and Sophia Ambasaki at the Nectar Foundation which cares for orphans and vulnerable children within the Lower Manya Krobo community, attracted queenmothers as well as opinion leaders in the Nuaso community.

Sampson Ambasaki, who presented the items on behalf of his siblings, emphasised the need for people in the Manya Krobo community to help those in need when it became necessary.

He said their main aim was to continue with the good work of their mother who touched the lives of the vulnerable in the Manya Krobo society.

“Our main purpose is to emulate her shining example when she was alive. She cared for anybody irrespective of who you are and where you come from provided you are in need, which made a difference in their lives,” Mr Ambakasi said.

He said it had come to a time that people who were once helped in one way or another and were in good positions to also show appreciation by helping others.

Mr Ambasaki, who is currently resident in the United States of America, was very grateful to his siblings and the Ghanaian community for supporting the foundation.

The Director of the Nectar Foundation, Rev. Fred Anyasor-Nartey and Jase Manye Amutia Ladjer of Djebiam, who received the items expressed their gratitude to the foundation for lifting part of the burden of foundation.

The Konor of Manya Krobo, Nene Sakite II, through whom the donation was made possible, lauded the donors for their effort to alleviate the plight of the needy and vulnerable in the traditional area.

He entreated all well-meaning Manya Krobo citizens both home and abroad to also support the needy and the vulnerable.