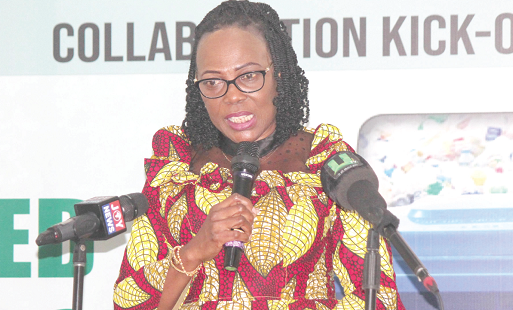 A project to segregate solid waste within communities in Accra has been launched.

Known as “Solid Waste Source Separations and Community Compost Kickoff Mission 2022”, the project is to be piloted in the Jamestown, Chorkor, Korle Gonno and Avenor areas across 18 months.

It will be undertaken by the Accra Metropolitan Assembly (AMA), in collaboration with C40 City Finance Facility (CFF), and funded by the German agency, GIZ; France Development Agency and the UK government.

The Deputy Head of Waste Management of the AMA, Victor Kotey, told the Daily Graphic that the project was part of priority actions in its Climate Action Plan to divert waste from the landfill sites in the metropolis.

He said before the start of the project in the first quarter of 2023, volunteers would be trained, waste bins would be supplied and community compost facilities would be constructed.

“Under the project, we will be promoting urban gardening and greening of public open spaces. The compost that will be produced from the communities will be used in greening community spaces as well as household and backyard gardening,” he added.

The Chief Executive of the AMA, Elizabeth Sackey, indicated that in 2015, the city — with support from the C40 CFF — conducted a greenhouse gas inventory to understand the key contributors of carbon emissions in Accra.

She said the report showed that close to 44 per cent of carbon and other dangerous gas emissions emanated from poorly managed solid and liquid waste-related activities.

She said Accra's Climate Action Plan (CAP 2020-2025) was, therefore, developed to change the narration contained in the report.

“Last year, the CFF Network under C40 cities and the GIZ opened a window for cities to present for support and implementation of projects that will help reduce carbon emissions.

“The city of Accra responded through the waste management department, with a proposal on solid waste source separation and community composting project,” she said, and added that out of the applications from across the world, “the AMA's project proposal was selected and awarded for due diligence.”

The Deputy Minister of Local Government and Rural Development, Osei Bonsu Amoah, said the project was officially setting the tone for further collaboration between the AMA and its supporting partners.

He said after the pilot, stakeholders must work together to ensure proper implementation of the project to benefit a wider community as well as to create jobs and access to services and infrastructure.

He indicated that the ministry had been keen on climate change adaptation and mitigation measures, and was currently implementing the Local Climate Adaptive Living Project.

In addition, he said, the assembly had launched a number of initiatives geared towards fighting the effects of climate change, including Planting for Export and Rural Development and Ghana Productive Safety Net.

The Regional Director for Africa of C40, Hastings Chikoko, thanked the partners and donors for their support, and expressed C40 CFF’s commitment to work with stakeholders to work to address climate change issues in Africa.