The country must pursue alternative revenue measures to support the national budget as a result of the slow down of global economic growth.

The Deputy Chief Executive Officer (CEO) of the Ghana Investment Promotion Centre (GIPC), Yaw Amoateng Afriyie, who said this, said the government could concentrate on value-added exports and an aggressive investment in debt recovery to achieve that goal.

Mr Afriyie said this in an address at the 2022 Financial Economic Seminar-Ghana in Accra last Monday.

It was on the theme: “Identifying and redefining the economic fundamental of developing countries: Anomalies and challenges - The case of Ghana.”

He said the principal investment promotion agency responsible for mobilising both foreign and local direct investment into the economy must be committed to a recalibration effort.

The event brought together global financial and economic experts to find solutions to the country’s economic crisis.

“Growth is stalling due to flat lining or the fall in trade, low capital availability, high debts, soaring inflation and an increase in interest rates.

In building towards a sustained path to recovery, Mr Afriyie said the Ministry of Finance, in 2019, established the Ghana COVID-19 Alleviation and Revitalisation of Enterprises Support (CARES) programme which captured the government's road map to mitigating the impact of the pandemic from an investment-led standpoint.

The programme, he said, was sustainable and impact-driven and sought to build resilience in the economy.

He said the CARES goal aimed to mobilise a GHc100-billion worth of investment inflows into the country between 2021 and 2024.

Mr Afriyie said GIPC would coordinate the government's effort to attract and retain that capital.

Additionally, to get inward investment from a spectrum of partners and prospects, he said, the GIPC was pursuing reforms to eradicate bureaucratic bottlenecks and build broad consensus on capital requirements.

He said the centre was also advocating against the multiple regulated issue and obtaining compliance from ministries, departments and agencies to ensure that foreign and local direct investment found a home in Ghana.

A former Rector of the Ghana Institute of Management and Public Administration (GIMPA), Prof. Stephen Adei, noted that the country was living in very difficult times and so it was time for academics to be engaged fully to find thought-through solutions. 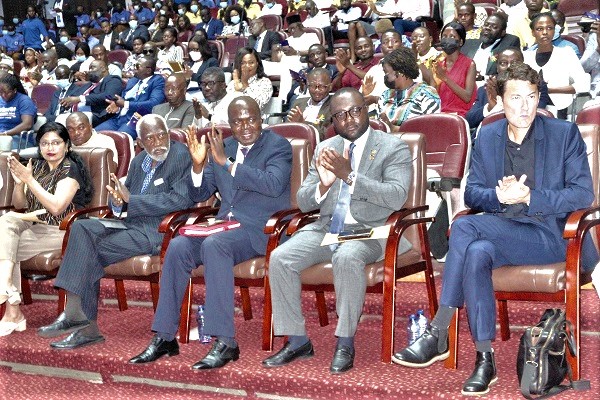 He said some of the things facing the country were unusual, especially with the COVID-19 pandemic and the Russia-Ukraine war which had thrown the world into unprecedented food and energy crisis.

Owing to such a situation, he said, even the advanced economies were struggling to rebalance.

“Locally, I’ve been observing with sadness the type of analyses which have been flooding the highly politicised media. There are realities which we must discover, not only to address the current development challenges but also garner lessons for the future,” he said.

The Member of Parliament for Nhyiaeso, Dr Stephen Amoah, who doubles as a non-Executive Director of the Board of the GCB Bank PLC, noted that often government’s securities offered higher rates than private sector returns.

Data on returns on risky assets and those on treasury bills between 2008 and 2018, he said, strongly confirmed such an assertion.

Dr Amoah said even currently treasury bill rates on the Ghanaian market were between 22 and 24 per cent, while banking industry rates were averagely 11 per cent.

The resultant effects, he said, were that the private sector, which created value chains and employment opportunities, did not have access to adequate funds.