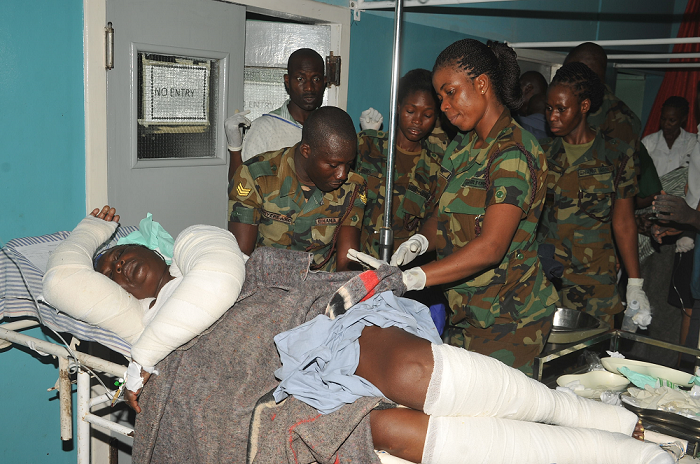 One more victim of the last December 22 gas explosion near the Ghana International Trade Fair Centre at La in Accra has died.

Mrs Bridget Kyerematen-Darko, the Executive Director of Aid to Artisans Ghana, and sister of the Trade and Industry Minister designate, Mr Kwadwo Alan Kyerematen, died 21 days after she suffered severe burns from the explosion on December 22, 2016.

Family sources confirmed to the Daily Graphic that she died on Wednesday morning while receiving treatment at the 37 Military Hospital.

Her death brings to 12 the number of fatalities in the explosion.

President Nana Addo Dankwa Akufo-Addo, while officially announcing the nomination of Mr Kyerematen as his Minister designate for Trade and Industry last Tuesday, explained that the nominee was absent at the Flagstaff House because his sister’s condition had worsened and he was by her side.

Fondly referred to as Maame Akosua, the late Mrs Kyerematen-Darko, who was in her 50s, was one of the two sisters of Mr Kyerematen.

Twelve persons, including Mrs Kyerematen-Darko, sustained various degrees of injury from the accident.

Some of the survivors of the explosion are still on admission at the La General and 37 Military hospitals in Accra.

The explosion occurred at the Louis Gas station around 5.30 p.m. that Thursday and swept through the street onto parts of the Trade Fair Centre.

Preliminary investigations pointed to a leakage at the station. An “irresponsible human error”, as a result of an operational challenge, was said to have caused an excessive pressure to build up in a vessel which was then discharging gas into a tank at the station.

The pressure built up in the vessel resulted in the neck of the vessel coming out because of excessive pressure. It was said to have leaked, and with a source of heat, it triggered fire, preliminary investigations  by the Ghana National Fire Service (GNFS) said.

The fire swept across the road and entered a section of the Ghana International Trade Fair Centre where three buildings and three cars were completely burnt.

The injured were mainly workers who were waiting for buses on the road that links the area to Tseaddo, Spintex and Teshie Tsui Bleoo.

The two gas stations in the area shared walls with a cemetery and the La-Dadekotopon Municipal Assembly.