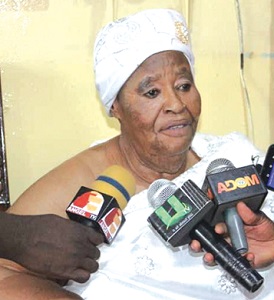 The Queen mother of the Akwamu Traditional Area (Akwamuhemaa), Nana Afrakuma II, has appealed to natives of Akwamu abroad and in other parts of the country to persuade investors to come to the area to help in its development.

She said the traditional area had been blessed with a lot of interesting sites including the Volta River, mountains and forest, which had attracted a lot of both international and domestic tourists over the years and could help in the development of the area.

The Akwamuhemaa made the appeal in an interview with the Daily Graphic, last Sunday, at the Akwasidae festival at Akwamu Fie in the Asuogyaman District of the Eastern Region, themed; "Let's unite to build Akwamu".

Nana Afrakuma II indicated that the tourism potential of the area had not been fully tapped; hence the need for investors to build partnership with the traditional authorities and all necessary stakeholders to exploit the tourism avenues for development, job creation for residents in the area and also generate revenue for investors, Akwamuman and the government.

The Akwamuhemaa called on aggrieved parties who filed a lawsuit seeking the review of the eligibility of the Akwamuhene, Odeneho Kwafo Akoto III, which had been dismissed by the Supreme Court on July 6, bringing closure to the 11-year legal battle to join the Akwamuhene in bringing development to the area.

She indicated that the over a decade legal tussle had impacted negatively on the development of the area, as governments over the years could not ascertain who to deal with as the traditional leader of the area.

Albeit, she said the return of calm and unity to the area needed commendation and called on the government to turn its attention to the area to give them what they were due for the development of the area.

She stressed that all parties must ensure they worked with the Supreme Court’s ruling to keep the area safe for development, adding that all that was needed in the area was development which would translate into a good standard of living for Akwamuman.

The Akwamuhemaa called for support for the Ohemea Afrakuma II Foundation, which sought to offer young girls in the area the opportunity to learn different trades at the Nana Afrakuma II Vocational Training Institute to become independent.

The foundation, which was launched as part of her 55th anniversary as the Akwamuhemaa, has so far enrolled over 25 young girls at the vocational training institute to learn bead making, sewing, catering and hairdressing among others.

She stated that with the support of the Asuogyaman District Assembly, "new structures are being put up at the Nana Afrakuma II Vocational Training Institute to admit more young girls and train them in vocational skills".

She acknowledged all benevolent individuals who had donated to the foundation, including the Member of Parliament and the District Chief Executive for the area, Thomas Ampem Nyarko, and Samuel Kwame Agyekum, as well as others who willingly offered to help train the young girls, some of whom were school dropouts.

However, she said the foundation still needed support in both cash and equipment to help train more brilliant young girls in the Akwamu traditional area.