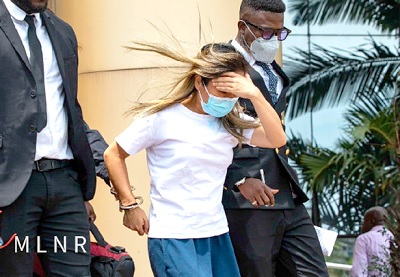 Aisha Huang (left) being escorted from the court
30.5k Shares

When he appeared before the trial court as the third prosecution witness, Nana Prempeh, who is also a Divisional Chief at Asante Akyem Agogo Traditional Area, said prior to the appearance of Aisha Huang, also known as En Huang, his company was able to manage the encroachment on the mining concession.

But the appearance of Aisha Huang and subsequent publication about her activity in the media “attracted many illegal miners to attempt to invade the concession”.

The witness was under the cross-examination of counsel for Huang, Miracle Atatsi, at the court where Huang has pleaded not guilty to undertaking a mining operation without a licence, facilitating the participation of persons engaged in a mining operation, the illegal employment of foreigners and entering Ghana while she had been prohibited from re-entry.

Counsel had put to the witness that mining activities on the concession were still ongoing because of him (witness); however, Nana Prempeh, who disagreed with counsel, explained that the encroachers knew about the Bepotenteng concession because it was mentioned in a publication about the activities of Aisha Huang.

“I disagree with what the defence has just said, Volta Resources Limited is the legal owner of a mining concession and it has all the rights to apply for a mining lease if it so wishes to do so.

“It is those without legal rights and mining concession who invade as was done by Aisha to engage in illegal mining,” the witness said.

Counsel further suggested to the witness that he had failed to acquire a mining licence because he had constantly enjoyed commissions from the activities of miners on his concession to date.

However, Nana Prempreh in his response told the court that if it was the desire of his company to enjoy commission, “the simple solution will be for the company to apply to the Minerals Commission for a mining licence to do so”.

He added that his sole interest in investing in Volta Resources Ltd was to create an indigenously owned large-scale mining company that would provide employment.