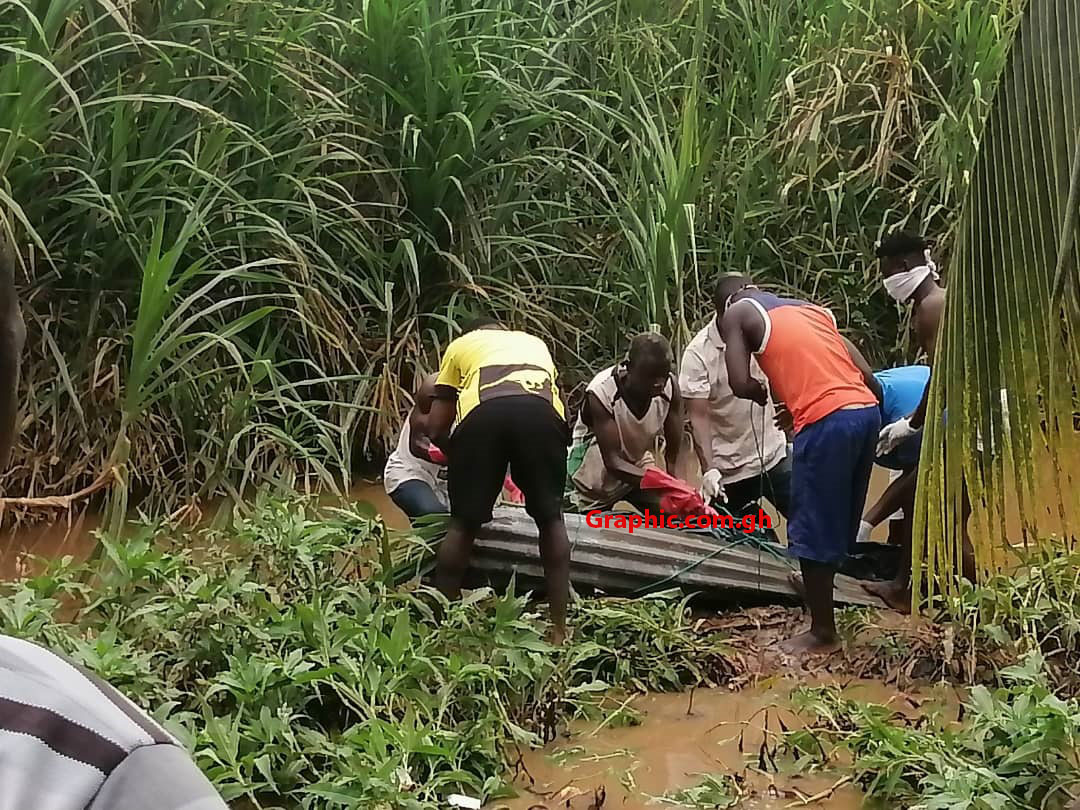 The body of teenager who drowned last week in the Akora river at Agona Swedru in the Central Region has been found.

The decomposed body of the 14-year-old teenager, Ekua Bogge, who got drowned in the Akora River in Agona Swedru on Saturday, March 27, 2021, was found by the rescue team on Good Friday.

The almost decomposed body was found around 3pm on Friday, April 2, 2021.

It was found hidden in the midst of some plants at the bank of the river at Atakwa, an area within the Botwe Estate in Agona Swedru.

The body was wrapped in a black polythene and carried on an iron sheet in line with tradition for those who drown in water.

Scores of relations and friends thronged the scene to catch a glimpse of the body when news went viral that the body of the teenager had been found.

Those who were at the scene could not hold back tears.

Speaking to Graphic Online, the police investigator of the accident which led to the teenager’s drowning, Sergeant Patrick Asante, noted that due to the state of the body it could not be placed at the morgue to be buried later.

He said a pathologist from the Swedru Government Hospital undertook an on the spot postmortem of the body after which the body was buried immediately.

They poured libation, slaughtered a sheep and two fowls to pacify the gods before divers entered the river in search of the body.

Bogge was knocked and pushed into the river together with her 18-year-old boyfriend, Sumi Samelew by a speeding unregistered Toyota Corolla private car ib Saturday, March 27, 2021.

Samelew together with six other occupants of the vehicle were rescued by some good Samaritans but one occupant of the car, identified as Samuel Kwame Kido was pronounced dead on arrival at the Swedru Government Hospital.

The driver of the unregistered Toyota Corolla saloon car together with five others on board were coming from the Texaco direction towards Chapel Square while the two lovers were walking on the left side of the road towards the main Swedru bridge across the Akora River.

According to information gathered, the driver of the Toyota Corolla who was speeding after initiating a sharp curve lost control and veered off its lane to his left side, hit the two lovers and a shop before entering the river around 2am together with the occupants and the two who were by the roadside.

The occupants of the vehicle have been identified as Samuel Konadu, driver and owner of the car, Kwame Deuces, Alhassan Okro, Hendricks, Kwaku Waddle and Samuel Kwame Kido.