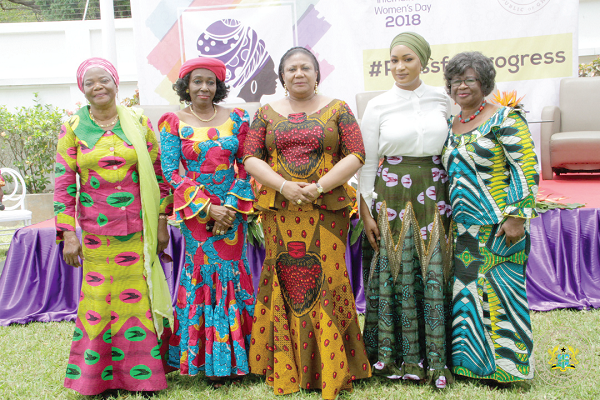 Speakers at a durbar to mark this year’s International Women’s Day (IWD) have called for a second look to be taken at the country’s customs and traditions which hinder girls from accessing education when menstruating.

Organised by the First Lady, Mrs Rebecca Akufo-Addo, the durbar attracted many dignitaries, including the wife of the Vice-President, Mrs Samira Bawumia; a former First Lady, Nana Konadu Agyeman Rawlings; a former Second Lady, Hajia Ramatu Mahama, and Mrs Joyce Aryee, the Executive Director of the Salt and Light Ministry and former Minister of Education.

In her address, Mrs Akufo-Addo said that education made girls heard, allowed them to be seen, gave them a voice to shape their future and also the voice to say: “No, I should determine who I spend my life with.”

She said marking the IWD allowed policy makers and others to take a critical look at the barriers that impeded the progress of women and the progress that had so far been made.

She emphasised that it was in the nation’s interest to ensure that both girls and boys developed to their full potential.

The First Lady said all over the world, “we are experiencing strong and concerted activism towards gender parity”, adding that “today is an opportunity for us to add our voices to the discussions to get us close to our goal. I certainly want my grandchildren to live in a Ghana where we have gender parity”.

Touching on the achievements of The Rebecca Foundation over the past year, she said the charity had started a women’s empowerment programme which had so far equipped 200 women in the Eastern and Northern regions with skills to improve their businesses and their family income “because, as we are aware, improving women’s economic status ensures that we bridge the gender gap”.

The UNFPA Country Representative, Mr Niyi Ojuolape, said adolescent pregnancies should not lead to adolescent dropping out of school, as that hindered them from exhibiting their full potential.

International Women's Day, which is marked on March 8, every year, is a global day celebrating the social, economic, cultural and political achievements of women. The day also marks a call to action for accelerating gender parity across the globe.

This year’s IWD was marked on the theme: “Press for progress”.

Meanwhile, Issah Mohammed reports that the Ministry of Gender, Children and Social Protection held a ‘Press for Progress’ walk and rally to commemorate the IWD in Accra last Wednesday, March 7, 2014.

The walk, which started from the Kwame Nkrumah Interchange and ended at the Black Star Square in Accra, was to help create awareness of the need for gender parity and gender inclusiveness within society.

It was on the theme: “Women too: Press for progress to develop Ghana”.

Speaking at the event, Ms Djaba called for unity among women in the wake of seeking women empowerment and equality in the country.

She advised women to speak up against the ills of society, especially those perpetrated against women and children.