Accept postings to where services are needed - Dr Kuma-Aboagye urges 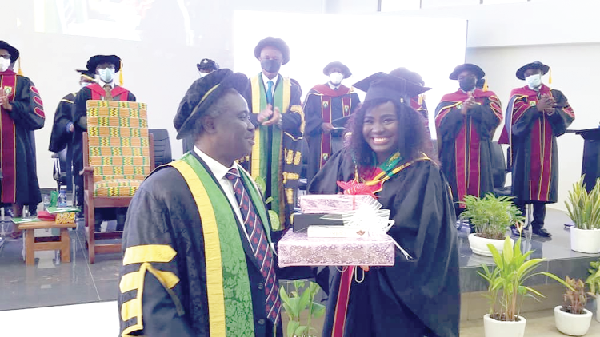 The Director-General of the Ghana Health Service, Dr Patrick Kuma-Aboagye, has appealed to products of the University of Health and Allied Sciences (UHAS) to accept postings to wherever their services will be needed in a bid to address the uneven and inefficient distribution of health workers in Ghana.

Dr Kuma-Aboagye gave the advice when he addressed over 600 graduates of the university at Sokode in the Volta Region during its 6th Congregation last Friday.

He stated that the phenomenon remained his greatest worry and appealed to the university to help address it.

He said though the doctor-to-population ratio had been improving steadily over the past years, it continued to remain unacceptably high in some areas in the country.

He said already several strategies including early promotions, opportunities for further studies, study leave with pay and career development programmes, most of which have been implemented, were in place to compensate staff who accepted postings to hard-to-reach areas in the country.

"We shall not abandon you if you serve in less endowed areas of the country. It shall only be for a couple of years. You shall be our heroes and we shall treat you same," he added.

The University of Health and Allied Sciences has since its establishment in 2011 chalked up several achievements including being ranked the Second Best University in Ghana and 36th in Africa by Alper-Doger Scientific Index in the World Scientist and University Rankings of 2021.

In his welcome address, the Chairman of the University Council, His Lordship Victor Jones Mawulorm Dotse, said despite the challenges the university encountered in the 2020/2021 academic year due mainly to the COVID-19 pandemic and its related issues, its management has been focused on handling all institutional affairs with commendable results.

He said the university had been making conscious efforts with regard to the research agenda and so it was necessary that government supported that actively by providing the necessary financial support for the university's policies.

The Vice Chancellor, Prof. John Owusu Gyapong, presenting his report said the institution was carving a niche for itself in the area of research.

"The research outputs of the university and its researchers are gaining global recognition for the cutting edge and innovative research being carried out here at UHAS," he stated.

There has also been an increase in engagement with policy makers and the health systems for the school's research outcomes to influence policy while the institute's researchers have also won several internationally competitive research grants.

Prof. Gyapong said UHAS continued to provide the needed support to all of its staff to enhance research.

In its quest to resolve major infrastructure deficits of the university, the school's management has initiated various projects that are currently in various stages of progress.

They include three students hostels at the Ho Teaching Hospital which have been completed and are in use.

A fourth is expected to be ready for use by the end of November.

A total of 686 graduates from the School of Allied Health Sciences, Basic and Biomedical Sciences, Medicine, Nursing and Midwifery and School of Public Health were conferred with various degrees and awards.

Prof. Gyapong in a congratulatory message to the graduates urged them to do their best in their chosen fields and remain great ambassadors of UHAS.