Abesim thrown into mourning - After death of chief announced 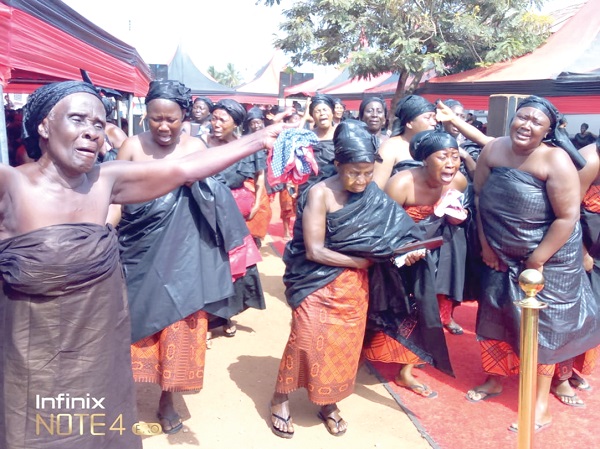 • Some women wailing after the death of the Chief of Abesim, Barima Kumi Acheaw, was announced
30.5k Shares

ABESIM, the Kyidom Division of the Dormaa Traditional Area in the Bono Region, was, on Saturday, thrown into a state of mourning when the death of the Chief of the town, Barima Kumi Acheaw, was formally announced.

Barima Kumi Acheaw, who was also the Kyidomhene of the Dormaa Traditional Area, died on September 30, 2022.

People from all walks of life thronged the town, adorning black and red apparels, to be part of the occasion.

The rather solemn ceremony turned sorrowful when the Sumankwaahene (Chief traditional healer) of the Dormaa Traditional Area, Baafuor Atoosi Ababio, made the announcement.

He announced that notwithstanding strenuous efforts made to save the life of Barima Kumi Acheaw, he could not survive.

Amid firing of muskets and throbbing of drums, women wailed while moving from one end of the gathering to the other.

The people of Abesim are already in a state of mourning after burying the late Queen of the town, Nana Yaa Pomaa, in August 2022 .

It was, therefore, a double agony for them when the death of Barima Kumi Acheaw was announced.

Barima Kumi Acheaw, 70, was a professional teacher who rose to become headmaster of the Boahen korkor Presbyterian Cluster of Schools, Sunyani, before his retirement.

He succeeded Nana Ansu Gyeabour in 2003 and reigned for 19 years before passing away.

The formal announcement ceremony was presided over by the Chief of Chiraa, who is also the Benkumhene of the Dormaa Traditional Area, on behalf of the Dormaahene, Osagyefo Oseadeeyo Agyemang Badu II.

He conveyed the condolence of Osagyefo Oseadeeyo Agyemang Badu to the immediate family and the entire people of Abesim.

Barima Minta Afari announced that a five-day period, beginning from Thursday March 23 to Monday, March 27, 2023, had been scheduled for the burial rites of the late Barima Kumi Acheaw.

Speaking to newsmen, the Adontenhene of Abesim, Nana Kyei Nketia, said during the 19-year reign of Barima Acheaw, he contributed immensely to the development of the town and its surrounding communities.

Nana Nketia said the late Barima Acheaw also established the Abesim Senior High School and pushed for the school to be absorbed by the government.