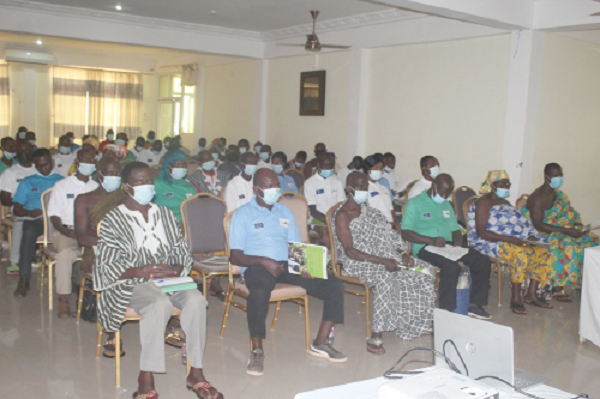 • Dr Ebenezer Djagbletey (inset), a Deputy Director of Operations, Northern Zone of FSD, delivering the keynote address at the launch of the project Follow @Graphicgh

Six districts in the Bono East and Ashanti regions are beneficiaries of a four-year project to complement the government’s efforts to restore degraded land and halt deforestation through the uptake of landscape approaches.

The project launched by Tropenbos Ghana and EcoCare Ghana, non-governmental organisations, and dubbed: “Landscapes and Environmental Agility across the Nation (LEAN)” is aimed at planting 600,000 trees on 240 hectares and improving the livelihoods of 12,000 small-scale farmers in the transition landscape of Ghana.

It also seeks to directly contribute to the national efforts of conserving biodiversity, improving livelihoods of smallholder farmers, increasing climate change resilience and reducing emissions from land use changes in the savannah, high forest and transition zones of Ghana.

The project, which is funded by the European Union (EU), will be implemented  in 60 communities in the six selected districts, with 10 communities from each district.

Various speakers at the launch from institutions such as the Department of Agriculture, Ghana Cocoa Board, traditional authorities, the Forest Service Division (FSD) and district assemblies pledged their support toward the successful implementation of the project.

During the launch, a Deputy Director of Operations in charge of the Northern Zone of the FSD, Dr Ebenezer Djagbletey, said the devastating impact of unsustainable agricultural practice and indiscriminate felling of trees was threatening agriculture, which was the main source of livelihood in the landscape.

“While we even try to ensure that charcoal production and farming activities are done sustainably, we must ensure that the livelihoods of the farmers and community members are equally protected and geared towards poverty alleviation,” he stated.

Dr Djagbletey said the need to restore the degraded landscape and to conserve the country's remaining forests were paramount to the Forestry Commission and it welcomed any intervention that was in line with the objectives.

He explained that the transition landscape was important to the socio-economic development of the country since it served as the food basket and contributed immensely to the country’s foreign exchange.

It also serves as the leading landscape in the production of cash crops such as cocoa and cashew, as well as fruit crops such as mangoes.

“Undoubtedly, agricultural production and charcoal production are the fastest drivers of deforestation in this landscape. We all know the implications of this to our environment,” Dr Djagbletey stated.

He explained that every tree was at risk of being harvested to produce charcoal or cleared for farmlands to satisfy the increasing demand for the commodities, either nationally or internationally.

Dr Djagbletey called on the public to be co-operative and support the project as its success would benefit all and future generations, saying “don't let us sit and look on as our biodiversity is reduced to nothing in the future”.

“We are the last generation that has the power or opportunity to put in measures to mitigate and adapt to climate change,” he stated.