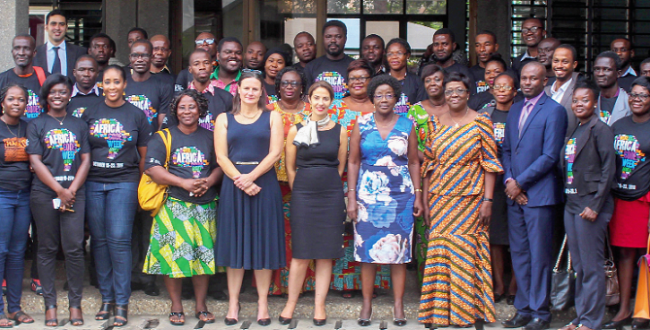 DreamOval Foundation, in collaboration with SAP, Cape Town Science Centre and the Ghana Education Service (GES), has organised a three-day workshop for teachers in Scratch computing, developed by the Massachusetts Institute of Technology (MIT).

The Train-the-Trainer programme, dubbed Ghana TTT, was organised for 370 teachers drawn from the Greater Accra Region at the Kofi Annan ICT Centre in Accra to train the teachers, using the Scratch language developed by Massachusetts Institute of Technology (MIT), to write basic code.

The original SAP idea was to provide customers with the ability to interact with a common corporate database for a comprehensive range of applications. SAP in German is Systeme, Anwendungen, Produkte, that is the name for "Systems Applications and Products," which is an inter-enterprise software company.

At the opening ceremony to launch the week, the Guest of Honour and wife of the Vice President, Mrs Matilda Amissah-Arthur, urged the teachers to take the training seriously in order to make an impact when training their students during the Africa Code Week, slated for October 15–23, 2016.

She said the way to teach had transformed and it was appropriate that Ghana had been chosen to join the nations to benefit from the training.

For her part, the SAP Director of Corporate Social Responsibility, Europe, Middle East and Africa, Mrs Claire Gillissen-Duval, said coding was the literacy of the digital age and a whole new language for children to speak fluently and express themselves in the 21st century.

That, she said, was what brought SAP, the Cape Town Science Centre and the Galway Education Centre together to give birth to the Africa Code Week, which is an annual teacher training programme.

She added that last year, the initiative empowered 89,000 young people across 17 countries to either write their first lines of code or simply touch a computer for the first time.

This year, she said the programme was targeting over 120,000 children across 31 African countries and expressed optimism that it would support efforts to transform Africa for the better.

For his part, the Business Development Manager for DreamOval, Mr Francis Ahene-Affoh, said “a monthly forum is organised by the organisation at the British Council in Accra to create a platform for the benefit of the present generation to help bridge the gap between the youth and the social culture.

The participants, who are required to teach Scratch computing during the Africa Code Week in their schools, expressed enthusiasm at the speed and new skill developed and were full of praise for the master trainers, who were drawn from Europe, Egypt and South Africa.