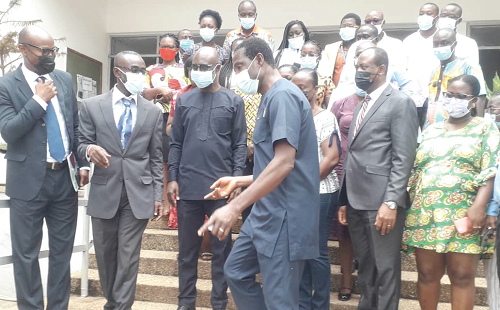 Twenty-five persons are undergoing training to qualify to become internationally certified drug prevention professionals to help in the fight against drug trafficking in the country.

The 10-day exercise, which is being held in Accra, is the second in a series for the participants who were selected from the counselling unit of the Ministry of Education, civil society organisations (CSOs) in drug prevention, drug prevention community-based organisations (CBOs) and the Narcotics Control Commission (NACOC).

The participants are to serve as trainers upon completion of the special programme under a universal prevention curriculum (UPC), one of the three curricula developed by the United States Bureau of International Narcotics and Law Enforcement Affairs (INL).

The UPC is coordinated by the Colombo Plan Drug Advisory Programme (DAP) with technical support from the United Nations Office on Drugs and Crime (UNODC), and global experts in drug demand reduction.

The focus of the training is on school-based and workplace substance abuse prevention.

The Principal Programme Officer in charge of Law Enforcement (drug) and project coordinator of ECOWAS, Mr Daniel Akwesi Amankwah, said at the commencement of the programme yesterday that it aimed at building a drug demand reduction global workforce to enhance evidence-based drug prevention activities.

The training, he said, was also designed for drug prevention professionals who worked with families, schools, workplaces and the community.

The underlying principle of UPC, Mr Amankwah further explained, was to ensure drug prevention that was based on scientific research, sound quality and ethical standards.

He said the West African Epidemiology Network on Drug Use (WENDU) report, statistics and trends on illicit drug use and supply (2014-2017), including other surveys, indicated that illicit drug use was still prevalent in many ECOWAS Commission member states including Ghana.

"Substance and drug abuse has remained a major fuel for those engaged in prostitution, kidnapping, armed robbery and terrorism. Wherever you find these criminal activities, the use of drugs is also rampant,” he said.

The Deputy Director-General in charge of General Services at NACOC, Mr Kenneth Adu-Amanfoh, commended ECOWAS for building the capacity of the beneficiary institutions.

He said in recent times there had been a spike in drug abuse in schools while drug addiction was also on the increase among employees in a number of workplaces.