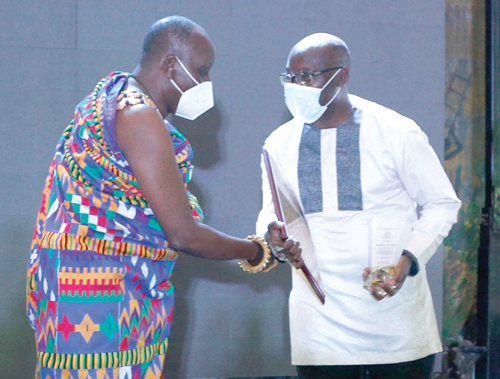 One hundred and sixteen civil servants and other stakeholders have been honoured at this year’s Civil Service Awards for the role they played in keeping the administrative machinery of the state running amid the COVID-19 pandemic.

These were staff from the various ministries and departments who had, in diverse ways, contributed to the outstanding performance of the service.

Seventy-six individuals received awards from the professional and sub-professional category while 10 each emerged from the directors and chief directors category.

Special awards were also presented to 10 members of the Awards Planning Committee for putting together the ceremony.

It was held on the theme: “Economic Transformation amid Covid-19 Pandemic: The Responsibilities of an Adaptive Civil Service”.

It was all pomp and circumstance and brought together several public servants and other government officials from across the country who were thrilled by live band and other musical performances.

The Chief Director at the Office of the Head of the Civil Service, Mr Godwin J. Brocke, took home the ultimate award as the Overall Best Performing Chief Director.

Other chief directors who won awards were from the Ministry of Works and Housing, Mr Solomon A. Asoalla; Alhaji Suleman Ahamed, Office of the Attorney-General and Ministry of Justice; Mr Patrick Nomo, Ministry of Finance; Mrs Levina Owusu, Ministry of Fisheries and Aquaculture Development.

Honorary awards were presented to some individuals for their contributions to the reformation and growth of the public administration over the years.

The Head of Civil Service, Nana Kwasi Agyekum Dwamena, congratulated the winners on their remarkable performance in the year under review and urged them not to relent but continue to be on track to ensure the growth and development of the service.

Although selected civil servants were rewarded at the ceremony, Mr Dwamena indicated that the entire workforce had collectively contributed significantly to the strides made by the service.

“I salute your perseverance, commitment and excellence even during the pandemic and I’m elated that close to about 100 civil servants are being honoured tonight,” he said.

He stated that the civil service remained resolute to develop new ways of achieving its mandate and meeting the needs of its clients.

Following the emergence of the pandemic, Mr Dwamena said the service had leveraged technology to perform most of its functions and gave an assurance that it would continue to explore more e-governance approaches in delivering its services.

He said the service believed in continuous improvement and saw every opportunity as a new beginning to learn and unlearn.

He therefore pledged that the management of the service would continue to deliver on its mandate to ensure that the vision of the government and the nation was realised.

Effort of the Civil Service

The Chairman of the Council of State, Nana Otuo Sereboe II, noted that the emergence of the COVID-19 pandemic had posed a catastrophic turbulence to the global economy and Ghana was not an exception.

In spite of the economic downturn and interruptions in the work processes, he said the Civil Service staff had been at the forefront in reshaping the economy and had also worked tirelessly to ensure the continuity of government business.

He therefore commended them for their great efforts towards national development.

Going forward, Nana Sereboe urged the Civil Service to brace itself and harness the winds of opportunities inherent in the pandemic through professionalism, innovation, creativity, adaptation and diligence in its mandate to support government’s transformational agenda.

As the service plays its pivotal role of policy reformation, coordination and implementation, he urged them to build collaboration and synergy with all sectors of the economy and also develop strategic and tailor-made capacity-building programmes.

Additionally, he urged them to accelerate the digitisation of work processes and also strengthen the performance of management systems.